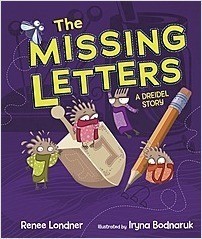 It’s almost Hanukkah and the dreidel-maker’s shop is busy. But all is not well for the four Hebrew letters that will soon go on the wooden tops. The Heys, the Nuns, and the Shins are jealous of everyone’s favorite letter, the Gimel. They decide to hide the Gimels so that the dreidel-maker can’t use them. But then the other letters learn that the Hanukkah story wouldn’t be complete without the Gimels! Is it too late for the missing letters to be found?

“The heys, the nuns and the shins are all ready for Chanukah. But where are the gimels? The dreidel maker is ready to affix the letters that adorn the four sides of the dreidel, but he has a problem – a missing letter. Look for the clues scattered throughout the book to see if he will find the gimels in time for Chanukah” – Cleveland Jewish News

“After a dreidel-maker’s workshop is closed for the night, the letters that make up the four sides of a dreidel talk among themselves. The ‘nuns,’ ‘heys’ and ‘shins’ aren’t happy because the ‘gimels’ are always the ones the players want, because players who spin a gimel get all the winnings for that round. One of the letters suggests hiding the gimels so the dreidel-maker won’t be able to use them. The shopkeeper explains the history behind dreidels to his apprentice, who has suggested they not make any dreidels. He tells him: ‘Every Nun, Gimel, Hey, and Shin has an important job to do. We must find the missing Gimels!’ The last double-page spread shows a family happily playing a game of dreidel — with all the letters intact.” – The Washington Post

“Turns out that the other three letters-the nuns, hays, and shins-are jealous of the gimel, because when players of the dreidel game land on it, they take everything in the pot. Why those three letters decide to give the dreidel maker back his gimels is a fitting resolution, and along the way, kids will learn why the dreidel is part of Hanukkah. They will also enjoy the colorful illustrations that accompany the story.” – Chicago Jewish Star

“The Hays, the Nuns and the Shins are jealous because the favorite letter for most kids is the Gimel. They decide to hide the Gimel so the dreidel maker can’t use it. Then, they realize you can’t have Chanukah without the Gimel. What will they do?” – Jewish Herald-Voice

“Children will be delighted to find out that dreidels come alive at night at the dreidel factory and talk to one another. Actually, they like to argue about the fairness of the dreidel game rules. The nuns are jealous of the gimels because … who wants to get a nun, anyway? But the shins have the most legitimate complaint, since people have to add to the pot when the dreidel falls on their letter. The heys, shins and nuns band together to figure out a way to make the gimels disappear before Hanukkah begins. They come up with elaborate ways to hide the sleeping gimels in a fun and busy double-paged, purple spread that kids will enjoy deciphering. In the morning, when it is time for the dreidel makers to add on the letters, they can’t find the gimels! When the dreidel maker explains the historical importance of the dreidel, the mischievous letters feel remorseful and do the right thing to make the dreidels whole again. It is a fun and silly story with delightfully appealing cartoonish illustrations and lots of purple — everywhere.” – Jewish Journal

“It is night in the dreidl workshop and the Hebrew letters (drawn by Iryna Bodnaruk as big-eyed creatures, similar to clothed baby hedgehogs) are having a debate — except for the gimmels, who are sleeping sweetly in their tray). The other letters are upset that everybody wants their dreidls to land on the winning letter gimmel. They decide to hide the gimmels, so the dreidl makers will have to manufacture the spinning tops without them. When The Missing Letters (by Renée Londner, Kar-Ben, £5.99) are discovered, the makers are shocked — and recall how playing dreidl saved the original Maccabees, as they used them as a diversion to conceal their Torah studies from the Romans (nicely incorporating an educational episode). Will the other letters release the gimmels? Age three to seven.” – The Jewish Chronicle

“All is not well in the dreidel maker’s shop for the Hebrew letters that will go on the wooden tops. The Gimels have been hidden by the others, who then learn Chanukah wouldn’t be complete without them! Is it too late? For ages four to nine.” – The Jewish Chronicle

“One night, after the dreidel maker leaves his shop, the letters Nun, Hey, and Shin conspire to hide the soundly sleeping Gimels—since the Gimels are everyone’s favorite Hebrew letter and they always win. ‘Think about it,’ says one Shin to the other letters, ‘without the Gimels, the rules of the game would have to change.’ When the dreidel maker and his apprentice arrive in the morning to finish carving the wooden dreidels and add the Hebrew letters, the Gimels are nowhere to be found. But then the Nuns, Heys, and Shins overhear the dreidel maker explaining how important and special each of the letters are, and the next night they put the Gimels back where they belong. The dreidel maker is able to complete the dreidels, with each letter in its proper place, just in time for Hanukkah.

The highly stylized, digital cartoon illustrations are colorful and lively, although they might strain credibility. When the letters come alive, they are drawn as little blob-like creatures with large expressive eyes (some wearing glasses), colorful T-shirts, and birdlike feet. Once affixed to the dreidels, they are just plain letters. Readers will also have to suspend disbelief when the Gimels all sleep through the entire two days and two nights of the story while the other letters are wide awake. A brief explanation of the Hanukkah story is integrated into the text and instructions for playing dreidel are appended. While the book might appeal to those looking for fresh, new titles for the holiday, it’s unlikely to stand out in the already overcrowded Hanukkah bookshelf.

“Set in the wood carver’s shop as the festival approaches, all the separate pieces of the dreidel are ready to be assembled. They come to life. Letters nun, hey and shin are jealous of gimel, popular with players because of its promised gains. They decide to hide the gimels so they cannot be pasted onto the dreidel form, then rules will have to change; the other three letters will have a happy ending. The concerned dreidel maker explains to his apprentice that all the letters as well as the spinning top are important in Jewish history: they are more than toys. In the days of the Maccabees as in other times, Jews were not allowed to study Torah. They did so in secret. When soldiers came to check on their activities they found the students playing dreidel rather than pouring over the Torah scroll. This bravery made the dreidel a Hanukkah tradition. In vain, dreidel maker and helper tear the shop apart to find the missing gimels as there is no time left to carve them again. That night the three letters pull the gimels from their hiding places. Next morning, when the gimels are back in their tray, the carver cannot figure it out. He finishes the dreidels. The text works if readers immediately suspend disbelief. The illustrations work from start to finish: they are lively, engaging and smart. The double page spreads that reveal the hiding, then the retrieving of the gimels, pinned to a blueprint-like ground, are terrific. The book is directed at knowledgeable readers. The Maccabees are cited, not explained; there is no further holiday background or information. The end page gives dreidel rules.”—Association of Jewish Libraries

“Everyone knows that when the dreidel lands on gimel, it’s winner take all. No wonder all the heys, nuns, and shins in the dreidel-maker’s shop are so resentful: what can compete with gimel’s popularity at Hanukkah? ‘When the dreidel stops on me, they have to add to the pot,’ grumbles a shin, as the letters engage in misery one-upmanship. But what if all the gimels went missing? Maybe the rules of the game—and the letters’ pecking order—would change? It’s an ingenious idea for a story but, alas, not a fully realized one. Bodnaruk’s illustrations feel unfocused and fussed over, and she struggles to turn the letters into vivid characters (they resemble blobby brown imps in colorful robes). Londner capably channels the letters’ jealousy (and Jewish inflections), but she brings the story to a halt midway to explain the dreidel’s backstory and prove that it is no mere toy.”—Publisher’s Weekly

“Tomfoolery before Hanukkah imperils a favorite game. Just before Hanukkah, the dreidels sit ready for their four Hebrew letters: Nun, Hey, Shin, and Gimel. Alas, the first three are discontents, and here is the reason. Picture a collection of tasty nuts on the table. If you spin the dreidel and it lands on Nun, then ‘nothing happens.’ If it lands on Shin, then a player must ‘add to the pot.’ If it lands on Hey, then ‘the player only gets to take half the winnings from the pot.’ But if it lands on Gimel, a player gets everything. The unhappy letters band together and hide the Gimels. In the morning, the white, human dreidel makers cannot finish their important work, and the master carver explains to his apprentice how the game originated when the Maccabees lived under Roman occupation. Fortunately the unhappy letters have second thoughts and all is well—just in time for a white family to celebrate the holiday. The story is a pleasant addition to the holiday canon. Bodnaruk’s digital illustrations busily fill the pages. Her Hebrew letters have spiky hairdos and googly eyes that look rather like eyeglasses, while her master carver sports a grand moustache and his apprentice wears headphones. A nice addition to Hanukkah collections.”—Kirkus Reviews

Renee Londner is the author of children's books including Ruby's Whistle and Stones for Grandpa, a Sydney Taylor Honor Book. Her stories have also appeared in magazines including Jewish Family, Shofar, and Spider. She lives in Connecticut.

Iryna Bodnaryk is a Ukrainian illustrator. She loves to experiment with media and style using a range of traditional and digital techniques. She loves travel, taking photos and sketching models. Iryna lives in Cyprus.