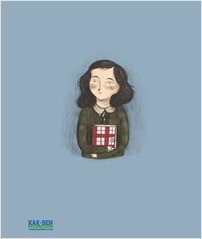 Anne Frank’s diary is a gift to the world because of Miep Gies. One of the protectors of the Frank family, Miep recovered the diary after the family was discovered by Nazis, and then returned it to Otto Frank after World War II. Displaced from her own home as a child during World War I, Miep had great empathy for Anne, and she found ways—like talking about Hollywood gossip and fashion trends—to engage her. The story of their relationship—and the impending danger to the family in hiding—unfolds in this unique perspective of Anne Frank’s widely known story.

“The story of their relationship (and the impending danger to the family in hiding) unfolds in this unique perspective of Anne Frank’s widely known story.” — James A. Cox, Midwest Book Review

“Author and illus­tra­tor do not deny Miep Gies’s extra­or­di­nary hero­ism but frame it as a nat­ur­al response to the events of her life and the depth of her emo­tion­al involve­ment in her Jew­ish com­pa­tri­ots’ tragedy.” — Emily Schneider, Jewish Book Council

“A solid, additional title that can serve as an introduction to Holocaust literature.” – Kathleen Isaacs, Children’s ­Literature Specialist, Pasadena, MD

“A historically accurate but relatively gentle introduction to the Holocaust for elementary-age readers.” — Miriam Aronin, Booklist

“The book focuses in particular on Miep Gies, the gentile woman who helped them and then found the diary, and some of the details about her childhood are startling.” — Kirkus Reviews

Barbara Lowell is the author of several books for children, including Sparky & Spike: Charles Schulz and the Wildest, Smartest Dog Ever. Barbara lives in Tulsa, Oklahoma.