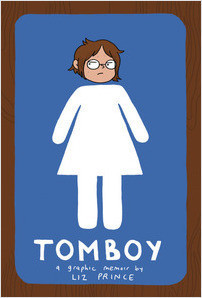 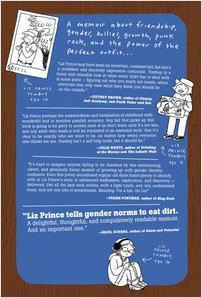 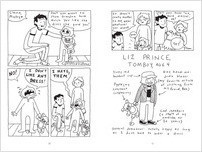 A memoir about friendship, gender, bullies, growth, punk rock, and the power of the perfect outfit . . .

Growing up, Liz Prince wasn’t a girly girl, but she wasn’t exactly one of the guys either (as she learned when her little league baseball coach exiled her to the distant outfield). She was somewhere in between. But with the forces of middle school, high school, parents, friendship, and romance pulling her this way and that, the middle wasn’t an easy place to be.

Tomboy follows award-winning author and artist Liz Prince through her early years and explores—with humor, honesty, and poignancy—what it means to “be a girl.” From staunchly refuting “girliness” to the point of misogyny, to discovering through the punk community that your identity is whatever you make of it, Tomboy offers a sometimes hilarious, sometimes heartbreaking account of self-discovery in modern America.

“Liz Prince may have been an uncertain, confused kid, but she’s a confident and sincerely expressive cartoonist. Tomboy is a funny and relatable look at what every child has to deal with at some point — figuring out who you really are inside, when everyone else only sees what they think you should be on the outside.”—Jeffrey Brown, author of Clumsy, Jedi Academy, and Darth Vader and Son

“Liz Prince portrays the awkwardness and humiliation of childhood with wonderful (not to mention painful) accuracy. Any kid that picks up this book is going to be privy to secrets most of us don’t learn until it’s too late, and any adult who reads it will be reminded of an essential truth: that it’s okay to be exactly who we want to be, no matter how weird everyone else thinks we are. Tomboy isn’t a self help book, but it should be.”—Julia Wertz, author of Drinking at the Movies and The Infinite Wait

“It’s hard to imagine anyone failing to be charmed by this entertaining, clever, and genuinely funny memoir of growing up with gender identity confusion. Even this pretty unconfused regular old dude found plenty to identify with in Liz Prince’s story of adolescent bafflement, exploration, and discovery — delivered, like all the best such stories, with a light touch, wry wit, understated irony, and not one iota of preachiness. Meaning: I’m a fan. Go Liz!”—Frank Portman, author of King Dork

“[G]ives readers space to question their own acquiescence to gender stereotypes.”—Publishers Weekly

“A real slash and burn of gender stereotypes, this title delivers a unique message for both teens and adults about finding your own way despite cultural conventions. Fans of Jeffrey Brown’s autobiographical comics will also enjoy it.”—Library Journal

“Purchase where graphic novel memoirs are in demand.”—School Library Journal

“[An] empowering memoir that should have ample appeal for any kid who feels like an outsider.”—Booklist

“The heroine of this charming, gently subversive graphic memoir loves Little League and hates dresses, so what does she grow up to be? Gloriously herself.”—People Magazine

“One of the most important insights—hard won after over a decade of searching for something about herself to love—that Liz gains is that gender can be identified on one’s own terms: girl doesn’t have to equal cheerleader.”—The Bulletin of the Center for Children’s Books

Liz Prince is the Ignatz Award-winning author of Will You Still Love Me If I Wet the Bed? (Top Shelf Productions, 2005), the world's cutest relationship comic. She is a regular columist for Razorcake magazine, has drawn covers and stories for the wildly popular Adventure Time comics series, and is the creator of the web comic Alone Forever. She lives in Massachusetts with her two cats, Wolfman and Dracula.

A memoir about friendship, gender, bullies, growth, punk rock, and the power of the perfect outfit . . . Growing up, Liz Prince wasn’t a girly girl, but she wasn’t exactly one of the guys either (as she learned when her little league baseball coach exiled her to… View available downloads →