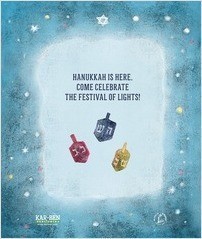 In this Hanukkah manual for the contemporary Jewish family, holiday history, rituals, activities, songs, and recipes provide tools for creating meaningful family moments in the light of the menorah. The book includes brief reflections to read aloud before reciting the candle-lighting blessings on each of the eight nights of Hanukkah.

“For those looking for a more serious take on Hanukkah rituals, this self-described handbook serves as a meaningful ‘manual for the contemporary Jewish family.’ The author posits that the ‘Hanukkah rituals are worth thinking about’ and offers useful poems and reflections that families can refer to on each night, along with the appropriate blessings. The reflections include important information about why some rituals are practiced, such as the lighting of the candles in particular ways or how the hanukkiah is constructed, or why we put it in a window for all to see. One lovely reflection highlights the shamash candle as the “helper” and asks us to remember all the people in our lives who serve and help us, including, “parents, teachers, medical professionals, librarians, police officers, firefighters, custodial workers.” Recipes, songs, crafts and the Hanukkah story are also included and illustrated beautifully by noted watercolor artist Kristina Swarner. This is a recommended first purchase for young Jewish families wishing to begin their own holiday rituals.”—Jewish Journal

“After so many years of celebrating Hanukkah, I thought there was nothing more to learn about the holiday but I was wrong. Jacqueline Jules has written an engaging picture book that I could easily see using with my grown-up family every year.

There’s an introduction, blessings, thoughtful verse to accompany each of the eight nights candle lighting along with a moving reflection to read silently, aloud or discuss together as a family. The second half of Light The Menorah! features four pages devoted to the Hanukkah story for which there are two versions, something I had never known. There’s the historical version and the rabbinic tradition which is the one I’ve always told about the oil from the damaged Temple lasting eight nights. The historic version says that since the Maccabees ‘couldn’t take a week to observe Sukkot properly, … they celebrated for eight days during the rededication of the Temple.’

The remaining pages answer common questions such as when does Hanukkah occur, where is it celebrated and more. I was delighted to read the section where Jules explains the role women played in the Hanukkah story. No one will be disappointed to see instructions for playing the dreidel game, latkes and jelly donut recipes in addition to easy crafts.

Swarner’s lovely watercolor illustrations dress up the text and are well paired on every page or spread. I was drawn to the book by the title and cover art and am glad I didn’t miss a single thing both Jules and Swarner had to share. This one’s a keeper and would make a wonderful gift to families just beginning to celebrate the Festival of Lights."―Good Reads with Ronna

“In this contemporary guide to Hanukkah, families discover unique ways to celebrate Hanukkah that give deeper meaning to the ritual of lighting the menorah, as well as easy to understand explanations of the holiday. Jules, an award-winning author, offers a short verse for each of the eight nights that can be read after lighting the menorah. They reflect the holiday’s themes of religious freedom, courage and miracles.

Swarner’s illustrations and border designs add warmth and glow. Songs, rules for playing dreidel and instructions for simple crafts such as a homemade coupon gift book make this book a welcome resource."―JTA

“True to its subtitle, this is a resource for families observing the Festival of Lights at home. The candle blessings – in Hebrew, transliteration, and English – are followed by free verse poems and brief reflections to read on each of the eight nights of the holiday. The poems contain references to light (‘First Night: On this night, we bless the first flame. The light willing to stand alone – to speak out when others stand back – to burn brightly when others are indifferent’). The reflections infuse the referenced historical, ritual, and cultural aspects of Hanukkah with meaning, and make connections to each poem’s theme (‘. . . there are times in life when we need to be the first candle, to brighten the darkness the best we can, even if we must stand alone.’). A four-page ‘Story of Hanukkah’ provides background information about the Maccabean revolt and the miracle of the oil, and a ‘More About Hanukkah’ section answers several questions including “How many candles are needed to celebrate all nights?‘; ’What role did women play in the Hanukkah story?’; and, ‘Where is the Hanukkah story recorded?’ Also included are instructions for playing dreidel, latkes and sufganiyot recipes, and Hanukkah songs and crafts. The text is enhanced by Swarner’s illustrations which are dreamily evocative – in this book as well as in her numerous Sydney Taylor award-winning and notable books.”—Association of Jewish Libraries

“The calm tone, scrupulous sourcing of information (as in the distinction between history and rabbinic lore), and clear instructions make this an excellent choice for families who are creating their first Hanukkah traditions.”—Publishers Weekly [Starred]

“Jules offers readers a compendium of information detailing the celebration of Hanukkah, a Jewish holiday
with historic rather than biblical origins. She provides traditional candle blessings (in English and
Hebrew); original poems and short reflections about each of the holiday’s eight nights; an overview of the
history surrounding this celebration’s origins; questions and answers about contemporary customs; an
explanation of the dreidel game; and several related songs, recipes, and crafts. Swarner’s colorful artwork
exhibits a dreamy feel that works well in linking contemporary and historic scenes. Many of the
illustrations feature blues and yellows (traditional Hanukkah colors) accented with purples and greens. She
also makes effective use of borders featuring classic Hanukkah images and symbols. This makes a good
resource for young families observing this holiday, particularly those who would like to move beyond the
emphasis on presents that results from Hanukkah’s proximity to Christmas. Ideal for religious collections,
this will also be welcomed in public libraries with Judaica sections.”—Booklist

“The Festival of Lights is full of music, games, and laughter but also prayer and quiet meditation. Uncover everything needed for an outstanding Hanukkah in this collection of stories, scriptures, recipes, crafts, and more. Read aloud in English or Hebrew to the candle blessings or listen to the poems and reflections shared each night by the menorah. Create new memories with loved ones while celebrating the past with homemade latkes or sufganiyot and candy dreidels.” – Foreword Reviews

Kristina Swarner decided to become an artist at the age of 3, and has been drawing ever since. A graduate of the Rhode Island School of Design, she has created award-winning illustrations for many children's books. She lives in Chicago.