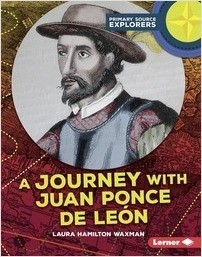 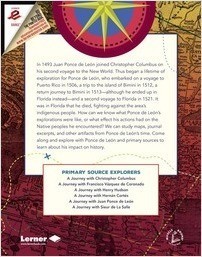 From the Series Primary Source Explorers

In 1493 Juan Ponce de León joined Christopher Columbus on his second voyage to the New World. Thus began a lifetime of exploration for Ponce de León, who traveled to Puerto Rico in 1506, the island of Bimini in 1512, Florida in 1513. He died in Florida, fighting against the area’s indigenous people. How can we know what Ponce de León’s explorations were like, or what effect his actions had on the Native peoples he encountered? By studying maps, journal excerpts, and other artifacts from Ponce de León’s time, we can learn about his impact on history.

“The writing is simple and direct, though rich with detail. Potentially problematic topics, such as the treatment of Indigenous people by invaders, are handled sensitively and honestly. . .These are first-rate research materials presented with much care for reluctant readers.”—School Library Journal, Series Made Simple

This dynamic series is packed with primary sources (letters, journal excerpts, maps, and objects from the period) to give readers new insight about some of the most studied explorers of the world. Each engaging title helps readers understand the historical context and consider the point… View available downloads →