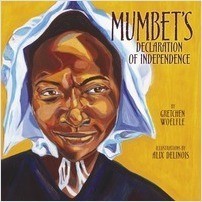 “All men are born free and equal.”

Everybody knows about the Founding Fathers and the Declaration of Independence in 1776. But the founders weren’t the only ones who believed that everyone had a right to freedom. Mumbet, a Massachusetts enslaved person, believed it too. She longed to be free, but how? Would anyone help her in her fight for freedom? Could she win against the richest man in town?

Mumbet was determined to try.

Mumbet’s Declaration of Independence tells her story for the first time in a picture book biography, and her brave actions set a milestone on the road toward ending slavery in the United States.

“The case is fascinating, emphasizing the destructive irony at the heart of the birth of America and making Mumbet an active and savvy architect of her own release, and this is likely to spur much discussion.” —The Bulletin of the Center for Children’s Books

“This book opens many avenues for discussion, including history, civil rights, the power and interpretation of the law, and imagery and artistry as conveyed by the rich drawings and Mumbet’s observations of freedom.” —Library Media Connection

“The case is fascinating, emphasizing the destructive irony at the heart of the birth of America and making Mumbet an active and savvy architect of her own release, and this is likely to spur much discussion.” —The Bulletin of the Center for Children’s Books

“Woelfle keeps the spotlight on Mumbet and brings her to life as a strong, smart person. Using a vibrant acrylic palette, Delinois highlights the brilliant greens and blues of the Berkshires setting and allows the light to play on Mumbet’s face to show both her humor and strength. . . . Though many have not heard the story of Mumbet before, no one who reads it now will ever forget it.” —The Horn Book Magazine

“Alix Delinois’s illustrations beautifully balance the intensity of this history lesson. . . . Woelfle’s narrative and her appended notes and references offer opportunities for discussing nuances in the history of American slavery.” —The New York Times Book Review

“Delinois’s thick layers of paint and vibrant palette infuse even the story’s upsetting moments with hopefulness, and Mumbet herself glows with determination and integrity.” —starred, Publishers Weekly

Gretchen Woelfle began writing for children by turning family history into short stories and has gone on to publish award-winning picture books, middle grade nonfiction, biographies, and historical fiction including The Wind at Work, Katje the Windmill Cat, and All the World's A Stage: A Novel in Five Acts. She is now focusing on biographies of unsung women in American history: Jeannette Rankin: Political Pioneer; Write on, Mercy! The Secret Life of Mercy Otis Warren; and Mumbet's Declaration of Independence. Visit Gretchen online at gretchenwoelfle.com.