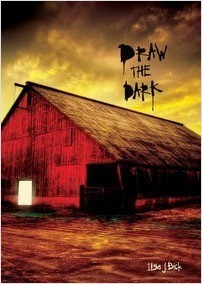 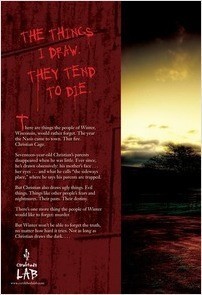 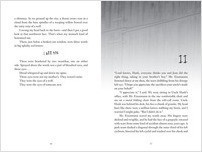 There are things the people of Winter, Wisconsin, would rather forget. The year the Nazis came to town, for one. That fire, for another. But what they’d really like to forget is Christian Cage.

Seventeen-year-old Christian’s parents disappeared when he was a little boy. Ever since, he’s drawn obsessively: his mother’s face…her eyes…and what he calls “the sideways place,” where he says his parents are trapped. Christian figures if he can just see through his mother’s eyes, maybe he can get there somehow and save them.

But Christian also draws other things. Ugly things. Evil things. Dark things. Things like other people’s fears and nightmares. Their pasts. Their destiny.

There’s one more thing the people of Winter would like to forget: murder.

But Winter won’t be able to forget the truth, no matter how hard it tries. Not as long as Christian draws the dark…

“This cold-case-meets-magical-realism narrative is a suspenseful tale and a critical examination of how history is written.” —The Horn Book Guide

“The breathtaking conclusion ties up most of the loose ends but leaves just enough unanswered questions to make the reader still vaguely suspicious of Winter and its residents.” —The Bulletin of the Center for Children’s Books

“The author paints vivid depictions of Christian’s mind, and the reader will be right there with him along for the ride. The ending will leave the reader holding on for dear life. The author has a few loose ends, but something this enthralling should never be expected to end neatly or conform to traditional literary notions. This title is a must for any school or public library—it is not to be missed.” —VOYA

“Bick has created a likable teen protagonist whose unique ability is completely believable in the author’s skilled hands. The novel brilliantly strikes a compelling balance between fantasy and contemporary fiction. Readers will be on the edge of their seats waiting to find out what happens next and will clamor for a sequel to follow Christian into the sideways place.” —School Library Journal

“‘Draw the Dark’ is one of four books launching Minneapolis-based Carolrhoda’s new line of distinctive fiction that the publisher says ‘offers YA authors and their readers an opportunity to explore and experiment with the full range of adolescent triumph and tragedy.’ In the book, Christian is a teen who loves to draw, but his talent scares him. He has sketched a door on his bedroom wall that changes locations during the night, and he somehow knows that if he draws a doorknob, he might find his dead mother on the other side. When he’s accused of painting swastikas on the old barn owned by the town’s mean rich guy, people think he’s even odder than they supposed. Christian is haunted by the idea that he can draw people’s deepest fears, causing them to die. When he’s sentenced to do community service at a nursing home, he’s drawn to a mute old man who had been a painter and harbors a secret. This is psychological horror at its best.” —Pioneer Press

“Bick builds the gripping supernatural/historical mystery to a satisfying conclusion that demonstrates the evils of the present can be just as terrifying as those of the past.” —Publishers Weekly

“Bick’s ambitious, intelligent, and relentlessly dark novel is a notable achievement. . . . Patient readers will be well rewarded. Gut-punch of an ending, too.” —Booklist

“Bick has interwoven suspense, mystery, and supernatural fantasy and has created a realistic, yet fantastic, character in Christian Cage. The reader is easily engaged in the suspense of Christian’s life and the tumultuous events surrounding him. Set in a sleepy rural town with ties to World War II, Winter, Wisconsin, is the perfect backdrop for this coming-of-age story. Bick’s novel is a welcomed addition to any mystery fan’s repertoire, but history buffs and fantasy readers will enjoy Draw the Dark’s account of the past.” —ALAN’s Picks

Ilsa J. Bick is a child psychiatrist, as well as a film scholar, surgeon wannabe, former Air Force major, and an award-winning, best-selling author of short stories, e-books, and novels. She has written extensively in the Star Trek, Battletech, Mechwarrior: Dark Age, and Shadowrun universes. Her original stories have been featured in numerous anthologies, magazines and online venues. Ilsa's YA paranormal, Draw the Dark, was also a semifinalist for the 2009 Amazon Breakthrough Novel Award (as Stalag Winter). Ilsa currently lives with her family and other furry creatures in rural Wisconsin and across the street from the local Hebrew cemetery. One thing she loves about the neighbors: They're very quiet and come around for sugar only once in a blue moon.