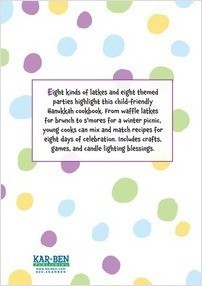 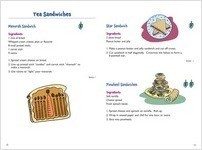 Food and Fun for Hanukkah

Eight nights of food, fun, and games for Hanukkah. With recipes for young and old, party themes, and holiday trivia.

“’Maccabee Meals’ features large, easy-to-read print, lots of lively illustrations and a selection of enticing, unique recipes such as Waffle Latkes with yogurt, or Chocolate Star Dreidels. Inter-spersed with the recipes and drawings are short stories and other Chanukah facts. One box tells readers that Chanukah and Christmas coincide once every 38 years. Who knew?

All recipes are marked with a dreidel symbol indicating whether they are dairy, meat or parve — and with a dreidel score ranging from no-cooking ease to the harder use of hot stove with an adult. Instructions for crafts, playing dreidel and candle blessings complete the book. Parents will likely appreciate the page on party etiquette and this one-liner: ‘Remember, good cooks always leave the kitchen neat and clean.’ —J Weekly

“Maccabee Meals: Food and Fun for Hanukkah (Kar-Ben) by Judye Groner and Madeline Wikler and illustrated by Ursula Roma has also been reissued, and it is full of fun facts and simple recipes children will enjoy. Here’s one for starters: ‘The first day of Hanukkah and Christmas day coincide once every 38 years. The next time it will happen will be in 2016.’ Such valuable trivia, along with delightful and simple recipes, can be found in this new addition to the Chanukah bookshelf. The thin paperback cookbook also includes such information as the candle-lighting blessings in English and Hebrew, dreidel trivia, table crafts and decoration ideas.

This is another clever do-over of an old favorite from 20 years ago written by the same authors. Of course, you will find simple recipes for cookies, latkes and sufganiyot, but have your kids ever considered spooning shredded potatoes into a heated waffle iron, baking them for brunch and topping them with yogurt? Certainly preschoolers would happily busy themselves preparing a menorah sandwich — cream cheese or peanut butter on bread, eight pretzel-stick candles, one carrot-stick shamash and nine raisins as flames. Plus, who needs those store-bought chocolate coins when you have a recipe to make your own gelt and have more fun? So if you’re noticing your young chefs are watching too many Food Network shows, maybe you’ll find a plate of chicken latkes, hero sandwiches or hot dog mini-kabobs at your next Chanukah celebration by leaving the preparations to them." —Jewish Journal of Los Angeles

“With the whimsically illustrated cookbook, ‘Maccabee Meals: Food and Fun for Hanukkah’ (Kar-Ben Publishing), children can take part in holiday preparations. Recipes, rated for difficulty, range from simple (egg cream, menorah sandwich) to sufganiyot (‘An adult should be nearby to supervise’). There are recipes for eight kinds of latkes, kitchen and etiquette tips, mini-stories (the dreidel, gelt, etc.), candle blessings, and table crafts.”—Chicago Tribune

Beyond the classic potato latke, young chefs will learn how to make seven other varieties from cheese, vegetables, apples and even chicken, for eight types of meals ranging from brunch to Shabbat dinner or a pajama party. Many of the recipes reflect American staples: Peanut-butter-and-jelly sandwiches cut in triangles are placed in a stack to create a Jewish star, for example. Hot dog mini-kebabs are another example, but Groner and Wikler are careful to include some lesser-known culinary customs, such as a meal designed for Sephardic communities that includes ‘burmuelos’ a flour, milk and egg–based fried doughnut sprinkled with cinnamon, and the crescent-shaped ‘new moon cookie’ offered in celebrations of Rosh Chodesh Tevet (the new moon that falls during Hanukkah). Primary colors in simply drawn, black marker–outlined illustrations decorate section headings and recipe titles in large purple and pink lettering. Sprinkled throughout are informative pages on such topics as the holiday itself, commemorative postage stamps and Israeli-style celebrations. Kitchen tips and difficulty scale, including those that require adult supervision, introduce the book, while specifics from candle-lighting blessings to dreidel rules and table-decorating crafts complete the text.

Both well-conceived and useful.” —Kirkus Reviews

Judye Groner and Madeline Wikler founded Kar-Ben Copies, Inc. in 1975, with the publication of My Very Own Haggadah, which they wrote and illustrated. The book has sold over 2 million copies and is still in print. They have authored more than two dozen books, as well as 36 editions of My Very Own Jewish Calendar, and have received the prestigious Sydney Taylor Body of Work Award from the Association of Jewish Libraries.

Judye Groner and Madeline Wikler founded Kar-Ben Copies, Inc. in 1975, with the publication of My Very Own Haggadah, which they wrote and illustrated. The book has sold over 2 million copies and is still in print. They have authored more than two dozen books, as well as 36 editions of My Very Own Jewish Calendar, and have received the prestigious Sydney Taylor Body of Work Award from the Association of Jewish Libraries.

Ursula Roma is an illustrator, fine artist and sculptor with a B.F.A. in design and an M.F.A. in Illustration. Ursula works in various media including pen and ink, acrylic, watercolor and digital illustration. She lives with her dog Maggie and three cats, who all help her finish illustrations when she gets too tired to paint. She lives in Cincinnati.