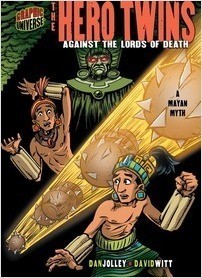 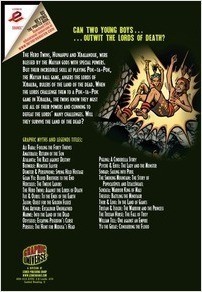 Against the Lords of Death [A Mayan Myth]

Can two young boys outsmart and outwit the lords of death? The Hero Twins, Hunahpu and Xbalanque, were blessed by the Mayan gods with special powers. But their incredible skill at playing Pok-ta-Pok, the Mayan ball game, angers the lords of Xibalba, rulers of the land of the dead. When the lords challenge them to a Pok-ta-Pok game in Xibalba, the twins know they must use all of their powers and cunning to defeat the lords’ many challenges. Will they survive the land of the dead?

“The action-packed hero tale and lively art will attract children who enjoy sports as well as those who like superhero comics, such as Spider-Man. Both the author and the artist researched the Popol Vuh and Mayan art and culture in order to be faithful to the legend.”
—Booklist

“A narrative of a contemporary boy assigned to read the myth for school begins and ends the story. . . this framing device may draw in readers resistant to the historical or ‘educational’ theme. Children may not pick this up on their own, but once they begin they’ll find much to enjoy.”
—School Library Journal

David Witt is an artist living and working in Saint Paul, Minnesota. His work as a poster artist has been published in the Art of Modern Rock by Paul Grushkin and Dennis King, and Gig Posters by Clayton Hayes. He has done menu screen art for Guitar Hero II, as well as creating numerous T-shirt designs and album art for bands around the world. He continues to work freelance and also finds time to paint and participate in art shows around the country. In the summer he spends most of his time in his garden. His work at Lerner includes Isis and Osiris, The Hero Twins, Nightmare on Zombie Island, Captured by Pirates, and Attack of the Mutant Meteors.