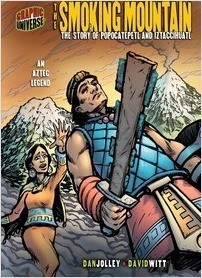 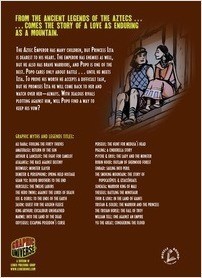 The Story of Popocatépetl and Iztaccíhuatl [An Aztec Legend]

From the ancient legends of the Aztecs, comes the story of a love as enduring as a mountain: The Aztec Emperor has many children, but Princess Izta is dearest to his heart. The Emperor has enemies as well, but he also has brave warriors, and Popo is one of the best. Popo cares only about battle . . . until he meets Izta. To prove his worth he accepts a difficult task, but he promises Izta he will come back to her and watch over her—always. With jealous rivals plotting against him, will Popo find a way to keep his vow?

David Witt is an artist living and working in Saint Paul, Minnesota. His work as a poster artist has been published in the Art of Modern Rock by Paul Grushkin and Dennis King, and Gig Posters by Clayton Hayes. He has done menu screen art for Guitar Hero II, as well as creating numerous T-shirt designs and album art for bands around the world. He continues to work freelance and also finds time to paint and participate in art shows around the country. In the summer he spends most of his time in his garden. His work at Lerner includes Isis and Osiris, The Hero Twins, Nightmare on Zombie Island, Captured by Pirates, and Attack of the Mutant Meteors.