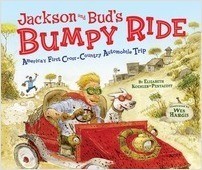 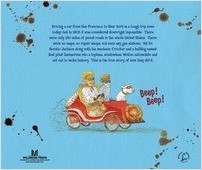 Dr. Horatio Jackson wasn’t necessarily a betting man. But in 1903, he overheard a stranger saying that it was just not possible to drive across the United States in one of those unreliable, newfangled automobiles. Jackson disagreed – he believed in the future of the automobile. So he made a $50 bet with the man that he could drive a car from San Francisco to New York. Jackson bought a used Winton automobile, hired a mechanic named Crocker, packed some supplies, and adopted Bud, a bulldog who became their mascot. The trio’s only goal was to make it from San Francisco all the way to New York City in one piece. Yet 5,600 miles and 63 1/2 days later, what they actually did was make history. This true story is based on Jackson’s own account of the first automobile trip across the United States.

“With no maps, repair shops, or gas stations, driving a car from San Francisco to New York was considered downright impossible in 1903. This book tells the true story of how a doctor, a mechanic, and a bulldog completed the trip.” —Learning

“Hargis’ glib cartoon illustrations of the begoggled trio and their clanging, mud-spattered auto are a terrific match to the lighthearted narrative. An afterword provides a deeper appreciation for just how remarkable and historical their adventure really was. Easily accessible history here.”
—Booklist

“In his cartoon pictures Hargis depicts all three of his goggle-wearing travelers having the time of their lives, determinedly riding their increasingly mud-spattered horseless carriage through mountains, deserts and storms. The author sticks closely to the historical record in her present-tense narrative and layers in more detail, plus photos, in a closing note. . . her invitation to clamber aboard will be hard to resist.”
—Kirkus Reviews

“Short sentences and readable prose capture much of the triumph and challenge of the 63-day trip undertaken in 1903 by Horatio Jackson, who was motivated by a $50 bet, and Sewall J. Crocker, his mechanic.”
—School Library Journal

Born in Wisconsin, Liz moved to California to attend college. She majored in children's theater and elementary education. After graduation she taught elementary and middle school and directed children's plays through a children's theater group. Liz taught teachers through CSU Hayward's East Bay Extension for ten years, as well as CUSC Extension. She presents assemblies and classroom workshops to all ages. Liz is chair of the California Writers Club Young Writers Contest, Mt. Diablo Branch, a county-wide contest and workshop program for middle school students.

Wes Hargis is an illustrator with sixteen years of experience working with clients such as King Features Syndicate, Lerner Publishing Group and HarperCollins. He lives with his lovely wife in Arizona.