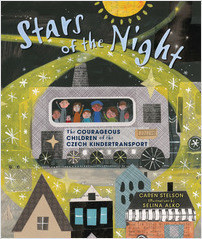 Stars of the Night

The Courageous Children of the Czech Kindertransport

“A not-to-be-missed, inspirational book about courage, heart, and the necessity of caring for others.”—Kirkus Reviews (starred review)

This powerful story is told from the collective perspective of the children who were rescued from Czechoslovakia on the eve of World War II, as Hitler’s campaign of hatred toward Jews and political dissidents took hold. The narrative starts in 1938 and follows the children as they journey to foster families in England for the duration of the war, return to Prague afterward in an unsuccessful search for their parents, and eventually connect with Nicholas Winton, a British former stockbroker who was instrumental in bringing them to safety. Winton and the Czech Kindertransport ultimately rescued 669 children from Nazi persecution.

Award-winning author Caren Stelson teams up with acclaimed illustrator Selina Alko to sensitively tell this tale of survival and defiance in the face of tyranny.

“A not-to-be-missed, inspirational book about courage, heart, and the necessity of caring for others.”—starred, Kirkus Reviews

“This book tells my father’s story through the eyes of the children he helped to save from the Holocaust. It is a reminder of the huge difference any one of us can make in the lives of others. Our world depends on it. It is down to people like him, people like us, to make the change we want to see.”—Nick Winton, son of Sir Nicholas Winton

Caren Stelson is an award-winning author of nonfiction books that focus on war and peace themes. She believes young readers want to know the truth about their world and how others find resilience and courage in difficult times. Her work includes Ezra Jack Keats Book Award winner A Bowl Full of Peace and Sachiko: A Nagasaki Atomic Bomb Survivor's Story, which was longlisted for a National Book Award and received a Sibert Honor Award, the Jane Addams Children's Book Award, and the Flora Stieglitz Straus Award. Caren and her husband Kim live in Minneapolis. www.carenstelson.com

Selina Alko spends her days melding words and mixed-media art to convey stories of hope and inspiration—as well as an alternative viewpoint. Her books include The Case for Loving: The Fight for Interracial Marriage, Can I Touch Your Hair?, Daddy Christmas & Hanukkah Mama, and I is for Immigrants, which was selected a 2022 Best Children's Book of the Year by Bank Street Books. Selina lives in Brooklyn, New York.