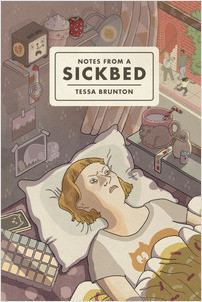 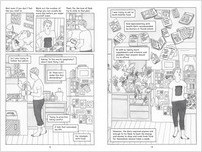 Notes from a Sickbed

In 2009, Tessa Brunton experienced the first symptoms of myalgic encephalomyelitis (also known as chronic fatigue syndrome). She spent much of the next eight years unwell, in a medical holding pattern, housebound and often alone. In 2017, she found a strategy that helped reduce her symptoms, and soon began creating the first installments of a graphic memoir. Notes from a Sickbed collects previously released and brand-new, unseen comics that recall her experiences with honesty, a pointed wit, and a lively visual imagination.

“An incredibly authentic and honest look at life with a chronic illness.”—School Library Journal

“Brunton’s art is distinct and emotionally evocative . . . The memoir achieves its mission to communicate to readers the isolation of chronic illness.”—Booklist

“Notes from a Sickbed is a sympathetic, inspiring graphic memoir account of grappling with an illness.”—Foreword Reviews

“Tessa’s intimate, surreal, and impeccably composed diary comics invite you in and wrap around you like a warm quilt. Her work is a soothing balm for the chronic frustrations of living in a human body.” —Lisa Hanawalt, creator of Tuca & Bertie

“This book is a gorgeous and necessary addition to the canon of graphic medicine.” —Nicole Georges, author-artist, Calling Dr. Laura: A Graphic Memoir

“Tessa Brunton generously shares with us not only her struggle of living with a chronic, little-understood disease, but also her go-to skills for coping: a sharp wit and a rich, fabulously intricate inner life. And her drawings are gorgeous!” —Rob Kirby, author-artist, Marry Me a Little

“Being stuck at home on the couch with an endless illness should be an absolute nightmare, but somewhere between Tessa’s unruly imagination and her dark sense of humor, she’s created a surprisingly exciting, funny, and strangely uplifting world. A truly unique and wonderful book.” —Julia Wertz, author-artist, Tenements, Towers & Trash: An Unconventional Illustrated History of New York City

Tessa Brunton is an cartoonist and author based in Santa Cruz, California. Her first comic book Passage was nominated for two Ignatz Awards: Outstanding Comic and Promising New Talent. Her mini-comic Second Banana is a Best American Comics 2014 notable comic. Her comics have appeared in Bitch Magazine, Maisonneuve Magazine, The Comics Journal, and many anthologies.

Notes from a Sickbed: An Interview with Author Tessa Brunton

In 2009, Tessa Brunton experienced the first symptoms of myalgic encephalomyelitis (also known as chronic fatigue syndrome). Notes from a Sickbed recalls the next eight years of her life—largely housebound—with honesty, a pointed wit, and a lively visual imagination. Today Tessa joins us View →