Tessa Brunton is an cartoonist and author based in Santa Cruz, California. Her first comic book Passage was nominated for two Ignatz Awards: Outstanding Comic and Promising New Talent. Her mini-comic Second Banana is a Best American Comics 2014 notable comic. Her comics have appeared in Bitch Magazine, Maisonneuve Magazine, The Comics Journal, and many anthologies.

What Do People Do All Day by Richard Scarry

“To be able to stand not knowing long enough to let something alive take shape! Without the two questions so much is possible. To all the kids who quit drawing—come back!” —Lynda Barry, What It Is

I loved other people’s art so much I wanted to try to make some myself!

Instead of looking at disappointments as failures, look at them as “not yet.” You just have to keep going and be comforted by the thought that the artists you admire have traveled this path as well. 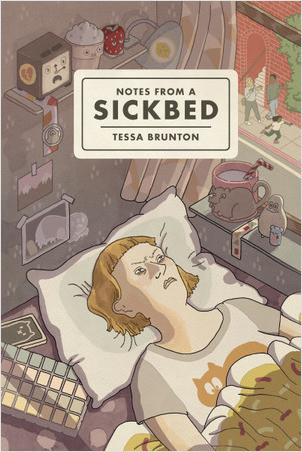 Notes from a Sickbed

Browse all titles by Tessa Brunton →