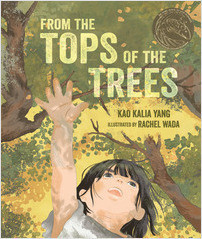 “Father, is all of the world a refugee camp?”

Young Kalia has never known life beyond the fences of the Ban Vinai Refugee Camp. The Thai camp holds many thousands of Hmong families who fled in the aftermath of the little-known Secret War in Laos that was waged during America’s Vietnam War. For Kalia and her cousins, life isn’t always easy, but they still find ways to play, racing with chickens and riding a beloved pet dog.

Just four years old, Kalia is still figuring out her place in the world. When she asks what is beyond the fence, at first her father has no answers for her. But on the following day, he leads her to the tallest tree in the camp and, secure in her father’s arms, Kalia sees the spread of a world beyond.

Kao Kalia Yang’s sensitive prose and Rachel Wada’s evocative illustrations bring to life this tender true story of the love between a father and a daughter.

“[A]n homage to four-year-old Kaila, who wished to see the world again and again from the tallest trees, and to her father, who first hoisted her up in the treetops.” —Children’s Literature

“In sensitive and empowering words, Yang speaks about historical truths and shares her own childhood story with readers.”—The Horn Book Magazine

“Beautiful in its simplicity and elegance, with a hopeful and inspiring message, this story will not soon be forgotten.”—starred, Booklist

“This story of resilience and generational hope is told in an expressive, straightforward narrative style. A visually striking, compelling recollection.”—starred, Kirkus Reviews

Kao Kalia Yang is a Hmong American writer, teacher and public speaker. Born in the refugee camps of Thailand to a family that escaped the genocide of the Secret War in Laos, she came to America at the age six. Yang holds degrees from Carleton College and Columbia University. Her works of creative nonfiction include The Latehomecomer: A Hmong Family Memoir, The Song Poet, What God is Honored Here?: Writings on Miscarriage and Infant Loss By and For Indigenous Women and Women of Color, and the upcoming title Somewhere in the Unknown World. Yang has also written multiple children's books such as A Map Into the World, The Shared Room, and From the Tops of the Trees. Her work has won numerous awards and recognition including multiple Minnesota Book Awards, a Charlotte Zolotow Honor, an ALA Notable Children's Book Award, the 2023 Asian/Pacific American Award for Literature, Dayton's Literary Peace Prize, and a PEN USA Award in Nonfiction.

Rachel Wada was raised between Japan and Hong Kong and is currently based in Vancouver, British Columbia. She has created illustrations for magazines, newspapers, advertising, and even a mural. Her first children's book project, The Phone Booth in Mr. Hirota's Garden, was recognized with the Freeman Award for Children's Literature. Her second children's book, From The Tops Of The Trees, won the 2023 Asian/Pacific American Award for Literature in the picture book category. Visually, Rachel's works are characterized by the use of rich colours, textures, and fine details through both digital and traditional mediums.