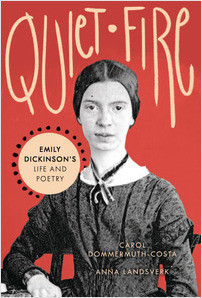 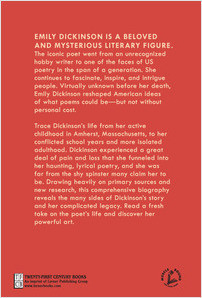 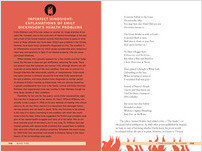 When Emily Dickinson died at her home in Amherst, Massachusetts, in 1886, she left a locked chest with hand-sewn notebooks and papers filled with nearly 1,800 unpublished poems. Four years later, her first collection was published and became a singular success. Today Dickinson is revered as one of America’s greatest and most original poets. Using primary source materials, including the poet’s own letters and poems, Quiet Fire presents the life and art of Emily Dickinson to a new generation.

“The author’s research is exemplary and represents a necessary addition to the shelves of all school libraries.” —School Library Connection

“Dommermuth-Costa and Landsverk’s research on the nonreligious, nature-loving, and doting daughter is revelatory; their back matter is impeccable; and the fascinating portrait they paint of the often misunderstood author is mesmerizing. . . . An excellent biography for all YA collections.”—starred, School Library Journal

“[T]he accessible but detailed narrative containing excerpts of her writing provides a great overview of many historians’ theories and is a perfect stand-alone text for casual readers or an excellent jumping-off point for aspiring Dickinson-ian scholars.”—Kirkus Reviews

Anna Landsverk is a writer, editor, and publishing professional. She lives in Minnesota with her adorable dog and extensive children's book collection.

Carol Dommermuth-Costa is an author based in New York state.