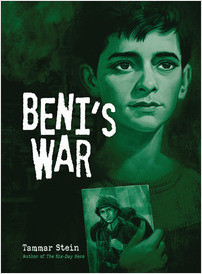 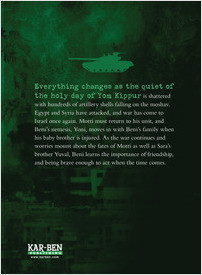 It’s Yom Kippur Eve in 1973, and twelve-year-old Beni thinks his biggest problem is settling in at his new school in the Golan, where his family moved at the end of the Six-Day War.

But on Yom Kippur, shocking news comes over the radio: a stunning strike on Israel has begun, led by a coalition of Arab states. In the blink of an eye, Beni’s older brother Motti is off to war, leaving Beni behind with his mother and father.

As bombs drop around Beni and his family, they flee to safety, every day hoping for news of Motti and the developments of the war. Beni must find a way to aid the war effort in his own way, proving that he too can be a hero, even as he learns along the way that there is dignity in every person, including the people he considers the enemy.

“Stein’s story is not a coming-of-age story; it is a coming-together story.” — EDITOR’S CHOICE Melissa Warren, Historical Novel Society

“What I enjoyed most in this book is the personified experience of a tween; how accurately the author described such everyday inner stories as magical thinking (‘get better’), the angst of being bullied, the elevating feeling of forgiving someone, the excitement of learning something new….” — Jewish Book World

“Readers will be motivated by Beni’s perceptiveness and inspired by the strength he demonstrates through acceptance—even towards the enemy.” — Rebecca Redinger, Lincoln Park Branch, Chicago P.L, School Library Journal Starred Review

“Beni’s War depicts neither an idealized Israel nor a flawed country which needs to be apologized for. Instead, it faithfully paints life as lived in a country where war is never far away.” — Marjorie Gann, retired teacher; author of Five Thousand Years of Slavery, Toronto, Canada, AJL

“Readers coping with shattered contemporary realities will recognize themselves in a child’s fears and growing empathy.” — Kirkus Reviews

Tammar Stein is the award-winning author of four young adult novels including Beni's War, which was named a Sydney Taylor Notable Book of Jewish Content. She is a graduate of the University of Virginia with a degree in English Literature. She has lived on three continents, in four countries and five states. She lives in Virginia with her family.