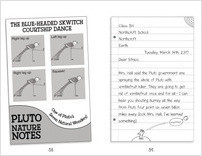 From the Series Penpals on Pluto

A humorous chapter book set in the future – first in Lou Treleaven’s Penpals on Pluto series.

I asked Mrs. Hall if I could swap pen pals, but she said there weren’t any boys left. I said I didn’t want to write to a girl on Pluto which, it turns out, isn’t even a proper planet.

Jon’s teacher is making him write letters – which is bad enough. What’s worst is that his pen pal is a girl. . . on Pluto! Reluctant at the beginning, Jon realizes that he has more in common with his pen pal, Straxi, than he first thought. They even send each other gifts! When Pluto’s President decides to pull up all the horrid-smelling vomblefruit to encourage tourism, there are disastrous consequences. Can Jon and Straxi save Pluto together, even though they’re four billion miles apart?

Presented as a series of letters sent between Jon and Straxi, Letter to Pluto is an engaging read for 7 – 9 year olds. Accompanying doodle-like illustrations help bring the story to life.

“A fun and fanciful exploration of life in the future.”—Kirkus Reviews

Lou Treleaven lives next door to a farm in Bedfordshire, England, with her family, a silly dog called Honey and a cat called Badger. She has written plays, picture books, and junior fiction.

Katie Abey is an illustrator who lives in Derbyshire, UK, with a cat, a hedgehog and a husband. She loves color and this is reflected in her bright studio and her hair, which changes color.