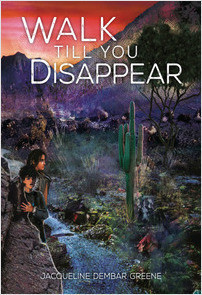 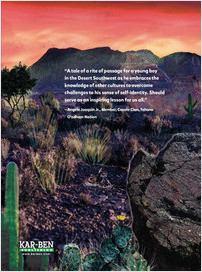 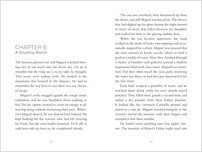 Walk Till You Disappear

Raised a Catholic, when 12-year-old Miguel suddenly learns that his ancestors were Jewish, his world seems to turn upside down. Rushing from the house, he becomes lost in the desert. Captured by a band of Apaches, after a daring escape he meets Rushing Cloud, a Tohono O’odham youth who is running away from a mission school. As the boys travel toward home, Miguel learns to survive in the desert, but more importantly, he begins to see his heritage in a new light.

Miguel Abrano lives on the family horse ranch just outside Tucson in 1872. He is nearly 13 and thinks himself almost a man, certainly old enough to decide he would like to become a Catholic priest when he is adult. Still, his family treats him as if he is immature. One evening a travelling peddler reads aloud from a secret book belonging to Miguel’s father, and Miguel is shocked to discover his family is rooted not in the faith in which he has been raised, but in a faith he has devalued.

He runs away from the ranch and is captured by Apaches, who force him to march miles along rough terrain with them. After a risky escape he is found, hungry and in pain, by Rushing Cloud, an Indian boy who feeds him, brings him back to health and guides him to his people. Miguel learns much along the way about the wild country they are traversing back to Tucson.

Along with this Miguel realizes that many of his ideas about people and their beliefs are narrow and often incorrect. Soon he is able to use his newly-learned skills to help Rushing Cloud.

This is a classic tale of a youth finding his true self in the wilderness. Written for grade levels 3 to 7, it has much to offer not only about open-mindedness but also about analyzing beliefs to assess their ultimate truth. All this as the reader is fascinated by descriptions of the desert southwest, its flora and fauna and the need for water. Adding depth and value to this book is an afterword describing the history of the area, a glossary of unfamiliar terms and a bibliography. Recommended, especially for boys.

“A survival story about a wounded boy who is lost and injured in the Arizona desert in 1872. A twist on the usual captivity Western, the story of young Miguel Abrano begins with the usual Native American clichés. Raised on a horse ranch in Arizona, young Miguel is a devout Hispanic Catholic who dreams of becoming a priest. But when Miguel’s father takes in a foreign traveler and asks him to translate an old family story written in a secret code, his well-laid plans fall apart. Shocked to learn that he and his family are secretly Sephardic Jews, Miguel rides angrily into the desert, where he is kidnapped by Apache warriors. Only after he escapes these men does he meet a kind Tohono O’odham boy named Rushing Cloud, who is escaping Indian boarding school and immediately agrees to help him. Per usual in the Western, the bad Natives are violent while the good Natives risk their own lives to educate the non-Native character and give him important spiritual lessons. The book’s saving grace is the twist: Young Miguel amends his judgmental Christian attitude after being inspired by Rushing Cloud. Miguel not only learns how to survive in the harsh desert—hunting, cooking, and tracking like an expert—he also learns to accept his complicated cultural inheritance. The desert is brought to life in a scenic novel with an important lesson about humility.”—Kirkus Reviews

Jacqueline Dembar Greene is the award-winning author of more than 30 books for young readers, including the American Girl® Rebecca Rubin series and The Secret Shofar of Barcelona. She lives in Wayland, Massachusetts.