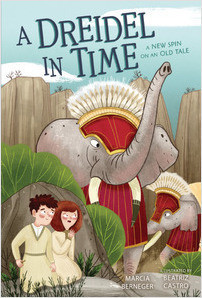 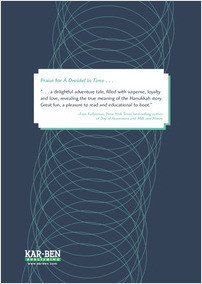 A Dreidel in Time

A New Spin on an Old Tale

Devorah and Benjamin are excited to open their Hanukkah present from Bubbe and Zayde, which turns out to be an ugly old dreidel. It’s a big disappointment—until the dreidel transports them out of modern Los Angeles to join the ancient Maccabees! Once they convince a suspicious Judah Maccabee and their new friends that they’ve arrived to help, they use what they know about the Hanukkah story from Hebrew school to aid the Maccabees in their battle against Antiochus. The kids know that the miracle of Hanukkah relies on finding the special oil for the Temple menorah, but where can it be?

Fans of “Magic Tree House” will love “A Dreidel in Time” by Marcia Berneger with illustrations by Beatriz Castro (ages 7+), which transports readers via a magical dreidel to when Hanukkah began.
When the grandparents of 9-year-old Benjamin and his 12-yearold sister, Devorah, visit on Hanukkah, the siblings hope to receive gifts. Instead, they’re offered a large, lopsided dreidel speckled red and gray with fancy Hebrew letters. Mom, Bubbe and Zayde encourage the disappointed kids to try out this strange dreidel. Respectful of family tradition, the siblings agree. The dreidel spins wildly, vanishes, and the children realize they’ve traveled back to the land of their ancestors.
There, Benjamin and Devorah meet siblings Simon and Shoshana, who help them escape the cruel soldiers arresting everyone observing Jewish traditions. Unfortunately, Judah Maccabee (the Jewish priest who led the Maccabean Revolt against the Seleucid Empire from 167–160 BCE) believes the time travelers are spies. Benjamin, knowing from Hebrew school how the Hanukkah story and history play out, warns the Maccabees that Antiochus will be sending soldiers to find and fight them. Still, the siblings are sent to a guarded cave. Inside, they again discover and spin the dreidel, which sends them forward in time two years before it disappears again.
This time, Maccabee adopts a battle strategy that Benjamin suggests, but the plan only partially works and Benjamin is captured by the enemy. Simon and Shoshana convince Maccabee to ambush the enemies. Devorah boldly rescues her brother and just barely escapes a commander’s spear, thanks to another spin of the dreidel. The siblings arrive at the Temple rededication, where their search for an unbroken jar of oil ultimately leads to a final dreidel spin and their return home – complete with a newfound appreciation of Hanukkah’s significance.

“There are very few easy chapter books with Jewish content. This is one that will appeal to any reader, Jewish or not, despite a reference to the Maccabees before their role is fully explained.” — Association of Jewish Libraries

SAN DIEGO – Ah, the joys of time travel! San Diego author Marcia Berneger, a retired teacher, uses this device to imaginatively retell the story of the first Chanukah in A Dreidel in Time, a chapter book for children between the ages of 8 and 13.

On the assumption that our readership is a lot older than 13-year-olds – a lot, lot older – I’ll share the plot with you. I figure that I won’t be spoiling the story for the eventual readers if I summarize it here so you can consider buying the $8.99 book published by Kar-Ben as a Chanukah gift for a child or grandchild.

Siblings Benjamin and Devorah are anxious to open their Chanukah presents, and have little patience for their visiting grandparents’ suggestion that they play with a family heirloom dreidel. But once they spin it, everything starts spinning and they find they have been transported from 21st century Los Angeles to Modi’in, Judea, in the second century before the common era. Mattisyahu and his son Judah are complaining about the many ways the occupying Syrian-Greeks are interfering with the practice of the Jewish religion.

After the Maccabees have taken to the mountains, Benjamin remembers a story he read in school about how George Washington fooled the British in one military campaign. He had his men pull out of the camp after they created some scarecrow like figures to sit near the campfire. This gave the British the idea that the camp was lightly defended, and when they sent some troops to take it over, Washington’s men came out of hiding and defeated them. Benjamin suggested the same stratagem to Judah Maccabee, only later remembering that Washington had learned of this plan by reading about the Maccabees’ war against the armies of Antiochus.

Whenever Benjamin and Devorah would spin the dreidel, it would land on a different letter, advancing them through the Chanukah story, until they came to the Holy Temple in time for Devorah to find the jar of oil that would burn miraculously for eight days. A final spin of the dreidel brought the brother and sister back to their home. They thought they had been away for a long time, but in fact, according to their parents and grandparents, they hadn’t been gone at all.

Now, however, Benjamin and Devorah were not so impatient to open their Chanukah presents. After seeing how the Judeans lovingly brought gifts to the refurbished temple after its desecration by the Syrian Greeks, the children decided it was much better to give gifts than to receive them. They scrambled to their rooms to find the presents they had put aside for their parents and grandparents.

The 82-page book is illustrated by Beatriz Castro.

“This enchant­i­ng book is illus­trat­ed in a cheer­ful, bright style which adds to the fun. Chil­dren of today will learn that Hanukkah is less about gifts and more about iden­ti­ty, brav­ery, and determination.” —Jewish Book Council

“This exciting retelling of the Hanukkah story should appeal to both Jewish and non-Jewish children.”―Kirkus Reviews

“This accessible chapter book tells the story of the events that led to the first Hanukkah. Devorah and Benjamin are disappointed when they receive an old dreidel from their Bubbe as a Hanukkah present. However, when they spin the dreidel, they are shocked to find themselves in ancient Modi’in with the Maccabees. Devorah and Benjamin land in the middle of the action as the Maccabees fight the soldiers of King Antiochus and try to reclaim their right to practice their religion. The two children have such an impact that it is implied that the Maccabees wouldn’t have succeeded without them. The miracle oil that lasted eight nights is briefly introduced at the end of the story. There are a couple of time jumps that break up the flow of the plot. The black-and-white illustrations enhance the action. All the characters are depicted as white. VERDICT A fun introduction to the story of Hanukkah. Recommended for libraries seeking Jewish stories for their early chapter book sections.”―School Library Journal

Marcia Berneger is a retired teacher who lives with her husband and three crazy dogs. She currently teaches Torah school in addition to volunteering in classrooms, libraries and with various fundraisers. She loves the way books teach children how to navigate their world and soar. She lives in San Diego.

Beatriz Castro was born in Logroño, La Rioja, Spain. As a little girl, she was always drawing and writing stories. A graduate of the School of Arts of Logroño, her illustrations have appeared on covers and in books produced by a variety of international publishers.