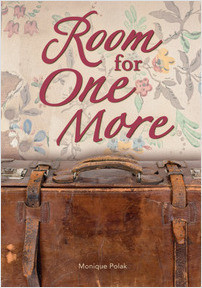 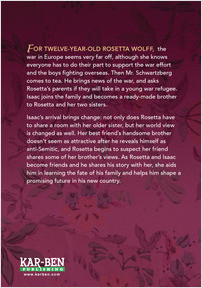 Room for One More

For twelve-year-old Rosetta Wolfson, the war in Europe seems very far off from her home in Canada. Then Mr. Schwartzberg comes to tea and asks Rosetta’s parents if they will take in a young war refugee. Isaac joins the family and becomes a ready-made brother to Rosetta and her two sisters.

Isaac’s arrival brings change. Her best friend’s handsome brother doesn’t seem as attractive after he reveals himself as anti-Semitic, and Rosetta begins to suspect her friend may agree with him. As Rosetta and Isaac become friends and he shares his story with her, she helps him learn the fate of other family members and helps him shape a promising future in his new country.

In 1942, twelve-year-old Rosetta and her Jewish Montreal-based family agree to take in Isaac, a Jewish teen refugee from Nazi Germany who’s private about what he’s endured. While Isaac and the family adjust to each other, Rosetta’s understanding of her Jewish identity and of the way her peers relate to it is put into a different perspective. The lessons she learns are often expressed in simpler terms than necessary. Isaac’s gradually-revealed backstory, however, is more complex than the Canada-set portion of the narrative; his mother, who resembled “an Aryan goddess” and appeared to side with the Nazis, may have had kinder intentions toward him than he thought. Though the novel could be subtler in places, it should work well as an introduction to a historical period with parallels today.

Rosetta Wolfson, second oldest in a family of three girls, loves to listen in on other people’s conversations. She is under the dining table listening when Mr. Schwarzberg, her father’s visitor, tells her father about Nazi atrocities in World War Two, especially the persecution of Jewish people. The Wolfson family, who attend synagogue regularly, agree to make room in their home for a Jewish boy from Germany who has been in an internment camp on an island in the Saint Lawrence River for almost a year.

Isaac is welcomed as a ready-made brother to the three girls. Only Rosetta realizes that he has a story to tell, and slowly, often painfully, Isaac answers her questions.

The friendship between Rosetta and Isaac develops slowly and sometimes uncomfortably with mistakes made on both sides. Rosetta tends to be too probing and insistent on getting answers. Isaac does not find it easy to speak about the horrors he has witnessed. Both have much to learn, Rosetta about respecting boundaries, Isaac about the surprising truth that changes his beliefs about his mother.

This novel for grades 3-7 comes from an experienced author who is respectful of the ideas and developing values of the young people for whom she is writing. Polak gives information about the horrors of Nazi Germany, especially its treatment of Jewish people, through the eyes of a teenage boy. The novel is evocative yet sensitive. The concept of accepting other religions and beliefs forms the foundation of the story but never becomes preachy.

“In 1942, 12-year-old Rosetta Wolfson lives with her Jewish family in Montreal, far away from the war in Europe. The Wolfsons take in Isaac Guttman, a young Jewish refugee who fled Germany for Britain, only to later be deported to Canada. Isaac is guarded and slow to trust, but gradually shares parts of his past with Rosetta. Polak’s novel introduces an often-overlooked facet of the Holocaust: that Britain expelled German nationals (Nazis as well as Jews and those rescued in the Kindertransport), shipping them to internment camps in Canada and Australia. Isaac is grateful to have been taken in by the Wolfsons, but that doesn’t prevent him from feeling guilt over the fates of his family members and experiencing anti- Semitism in Canada. Secondary plots involving Rosetta’s efforts at public speaking, and her gradual realization that her best friend harbors anti-Semitic views, are also well handled. A strong family story;
pair with Lucy Strange’s Our Castle By the Sea (2019) for another look at wartime expulsion of Germans.”
—Booklist Online

“As timely as historical fiction can be.”—Kirkus Reviews

Monique Polak is the author of more than 20 novels for children and young adults. A two-time winner of the Quebec Writers' Federation Prize for Children's and Young Adult Literature, Monique also teaches English and Humanities at Marianopolis College in Montreal and is a regular contributor to the Montreal Gazette.