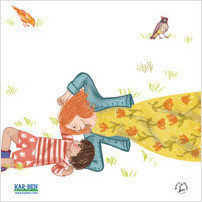 In the Jerusalem Forest

A child and her mother take a walk in the forest near Jerusalem, gazing at their reflections in a rippling pond and appreciating their time together.

Inspired by the poem “The Pond” by Hayim Nahman Bialik.

Inspired by “The Pond,” a Hayim Nahman Bialik poem, this lovely picture book tells of a mother and daughter’s walk in a forest near Jerusalem. As they walk past a small pond, the girl observes their reflections in the pond, looking the same, but upside down. As the wind picks up, the girl becomes wary, wondering where the “upside-down forest” went and asking her mother for a hug. When the sun returns, the world is wonderful again. Illustrated with what appears to be oil pastels and watercolors, the full page and double page depictions of the water’s edge, the trees and flowers, and fish and birds convey a sense of calm that is dispelled as the wind goes whoosh and the upside-down reflections are lost. There is much to discuss in this deceptively simple story: how can you tell that the girl and her mother have become worried? Look carefully at the pictures of the water and sky. Can you tell where each begins and ends? Examine the way the mother’s dress looks like it blends in with the trees, flowers, and grass near the water. Do the mother and daughter “look the same, like two drops of rain?” The book concludes with an author’s note about Hayim Nahman Bialik, and an explanation of the meaning of the poem upon which the book is based. The statement that the poem “is a beautiful exploration of the relationship between Torah and reality” leaves one wondering if the author read an entirely different poem!

Based on the poem, “The Pond,” by clas­sic Hebrew poet Hay­im Nach­man Bia­lik, this peace­ful pic­ture book fol­lows a young girl and her moth­er as they walk togeth­er through the Jerusalem for­est and gaze at their reflec­tions in a pond. The trees and the sky, reflect­ed in the water, seem upside-down to the sen­si­tive, per­cep­tive girl, giv­ing her and the read­er the sense that per­spec­tive can be vari­able and chang­ing; every­thing can be what it seems to be while also expand­ing the mind with an appre­ci­a­tion of greater possibilities.

Bia­lik, often called “Israel’s nation­al poet,” was born in Rus­sia and, late in life, relo­cat­ed to Israel before it was a state. His poems were writ­ten in Yid­dish but pri­mar­i­ly in Hebrew, and were often about Jew­ish his­to­ry and Zion­ist aspi­ra­tions. His love for the land of Israel is reflect­ed in his lyri­cal poems about nature, some of which were writ­ten for chil­dren. “The Pond,” writ­ten between the years 1904 and 1905, is a com­plex and nuanced ode to nature, intro­spec­tive thought, and Jew­ish phi­los­o­phy. It inspired Devo­ra Busheri’s cap­ti­vat­ing and thought-pro­vok­ing pic­ture book which is decep­tive­ly sim­ple and sub­tly con­veys a sense of Bialik’s thoughts and expres­sive language.

Illus­tra­tor Noa Kel­ner paints the for­est as a place of mys­tery and peace, a per­fect set­ting for reflec­tion and qui­et joy. The moth­er and child react to the scenery all around them and the view­er is as much a part of the land­scape as the land­scape is part of the view­er. The art and text meld into a seam­less whole.

This book is a love­ly homage to poet­ic imagery, nature, and the bond between par­ent and child.

“[A] good introduction to a nature walk, and could lead to some interesting explorations of the properties of water and reflection.”—Booklist

“Readers will be happily confused by this picture book.Almost every page of the story—based on a piece by Israeli national poet Hayim Nahman Bialik—is gently disorienting. The narrator is a young girl walking through the woods with her mother, and as they look at the reflections in the water, she says, ‘The forest is upside-down,’ and ‘There in the water: the sky!’ Kelner takes this as a challenge. In her paintings, the sky is often the same color as the water or the ground, and the characters’ clothing matches the nature around them. The most challenging section is when the girl says, ‘Ima and I see our reflections in the pond. We look the same, like two drops of rain.’ (‘Ima’ is the Hebrew word for ‘Mom.’) This isn’t quite true. The mother is tall, freckled, and redheaded. The daughter is more compact, and her skin is the pale brown of coffee ice cream. But the paintings include small details that mirror each other so that the characters really do start to look alike. Busheri adds off rhymes to the text at unexpected moments (‘same’ and ‘rain,’ ‘come’ and ‘sun’), which is both lovely and a bit startling. The imagery, both in the words and the pictures, is so beautiful that readers may be heartbroken when a ripple in the water takes the reflections away. People will be stunned by this book even if they’re too astonished to explain why.”—Kirkus Reviews

Devora Busheri is a children's book writer, editor, and translator. She has authored and edited many books for various publication houses in Israel. Her previous include The Abba Tree and In the Jerusalem Forest. Devora lives in Jerusalem with her husband and their four children.

Noa Kelner graduated from the Bezalel Academy of Art & Design. She works with book publishers, newspapers, and magazines, and loves to give stories color and form. She is the co-founder and artistic director of the annual "Outline – Illustration and Words" festival in Jerusalem and also teaches illustration. She lives in Jerusalem with her husband and two children.