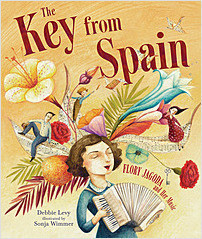 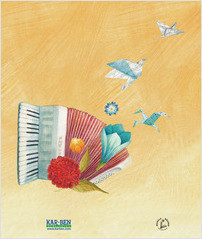 The Key from Spain

Flory Jagoda and Her Music

When Flory’s ancestors are forced to leave Spain during the time of the Spanish Inquisition, they take with them their two most precious possessions—the key to their old house and the Ladino language. When Flory flees Europe during World War II to begin a new life in the United States, she carries Ladino with her, along with her other precious possessions—her harmoniku and her music. But what of the key?
Discover the story of Ladino singer Flory Jagoda.

The Key from Spain is high­ly rec­om­mend­ed both for chil­dren and adults inter­est­ed in learn­ing about Sephardic cul­ture and history."―Jewish Book Council

“This work is a must-purchase for library collections.”—starred, School Library Journal

“…this is a worthy (though fictionalized) homage to a language and its fervent promoter.”— Kay Weisman, Booklist

Sonja Wimmer loves painting pictures and telling stories. After studying and working some years as a designer in her hometown Munich and Brussels, she decided to pack her suitcase and move to Barcelona to study Illustration at the "Llotja" Arts and Crafts School. Since then she lives between brushes and all kinds of wonderful tales, working as freelance illustrator for publishing houses and other clients around the world.