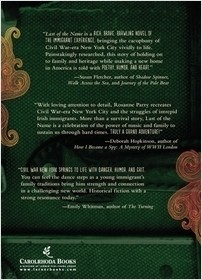 Twelve-year-old Danny O’Carolan and his sister, Kathleen, arrive in New York City in 1863. Kathleen refuses to be parted from her only remaining relative, so she finds a job in domestic service for herself and her younger…sister. Danny reluctantly pretends to be a girl to avoid being sent to the children’s workhouse or recruited as a drummer boy for the Union army. When he occasionally sneaks off to spend a few hours as a boy and share his rich talent for Irish dancing, he discovers the vast variety of New York’s neighborhoods. But the Civil War draft is stoking tensions between the Irish and free black populations. With dangers escalating, how can Danny find a safe place to call home?

“An excellent addition to any historical fiction collection; recommended for fans of Little Women or A Tree Grows In Brooklyn.”—School Library Journal

“An exuberant dash through a pivotal year in American history.”—starred, Kirkus Reviews

“Last of the Name is a rich, brave, brawling novel of the immigrant experience, bringing the cacophony of Civil War-era New York City vividly to life. Painstakingly researched, this story of holding on to family and heritage while making a new home in America is told with poetry, humor, and heart.”—Susan Fletcher, author of Shadow Spinner, Walk Across the Sea, and Journey of the Pale Bear

“With loving attention to detail, Rosanne Parry recreates Civil War-era New York City and the struggles of intrepid Irish immigrants. More than a survival story, Last of the Name is a celebration of the power of music and family to sustain us through hard times. Truly a grand adventure!”—Deborah Hopkinson, author of How I Became a Spy: A Mystery of WWII London

“Civil War New York springs to life with danger, humor, and grit. You can feel the dance steps as a young immigrant’s family traditions bring him strength and connection in a challenging new world. Historical fiction with a strong resonance today.”—Emily Whitman, author of The Turning

Rosanne Parry is the author of six middle grade novels. The most recent are Last of the Name and A Wolf Called Wander. She is a part-time bookseller at legendary Portland independent bookstore, Annie Blooms, and is the captain of the League of Exceptional Writers, a free mentoring workshop for young avid readers and writers, sponsored by the Oregon SCBWI and Powell's Bookstore. She lives with her family in an historic farmhouse and writes in a treehouse in her backyard.

Twelve-year-old Danny O’Carolan and his sister, Kathleen, arrive in New York City in 1863. Kathleen refuses to be parted from her only remaining relative, so she finds a job in domestic service for herself and her younger…sister. Danny reluctantly pretends to be a… View available downloads →