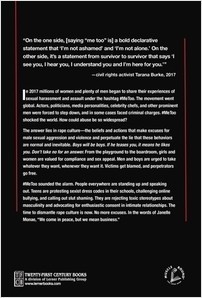 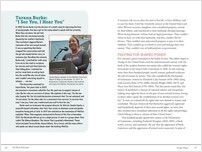 Soon after the sexual misconduct allegations against film producer Harvey Weinstein became public in late 2017, the #MeToo movement went viral, opening up an explosive conversation about rape culture around the globe. In the US, someone is sexually assaulted every 98 seconds. More than 320,000 Americans over the age of twelve are sexually assaulted each year. Men are victims too. One in thirty-three American men will be sexually assaulted or raped in his lifetime. Yet only 3 percent of rapists ever serve time in jail. Learn about the patriarchal constructs that support rape culture and how to dismantle them: redefining healthy manhood and sexuality, believing victims, improving social and legal systems and workplace environments, evaluating media with a critical eye, and standing up to speak out. Case studies provide a well-rounded view of real people on all sides of the issues.

“[O]ffers a timely discussion of how restorative justice can address the needs of all affected in cases of sexual harassment or violence. . . . Highly recommended for every library that serves teens.”—starred, School Library Journal

Soon after the sexual misconduct allegations against film producer Harvey Weinstein became public in late 2017, the #MeToo movement went viral, opening up an explosive conversation about rape culture around the globe. In the US, someone is sexually assaulted every 98 seconds. More than… View available downloads →

It’s a tricky topic, but kids deserve to know the facts about reproduction, sex, gender, relationships, and consent. Here’s a collection of books that your shelves should hold for kids to educate and empower themselves. How Do You Make a Baby? Interest Level: Grade 4 – Grade 7 Reading… View →