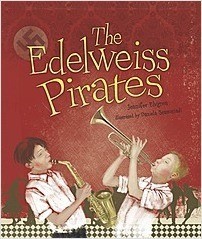 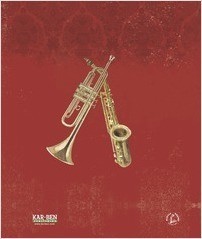 In Germany in 1938, playing and dancing to jazz music is forbidden. The Hitler Youth patrol the night streets looking for anyone who breaks the rules. Albert is a member of the Edelweiss Pirates, a secret group of young people who defy the Hitler Youth. They play the forbidden music and work against the Nazis any way they can. Albert’s younger brother, Kurt, loves jazz and longs to be a Pirate, too. Although he’s too young to be an Edelweiss Pirate, Kurt can still find a way to take a stand.

“Set in Germany in 1938, this story’s young narrator, Kurt, longs to be an anti-Nazi activist like his older brother, who is a member of the resistance group, the Edelweiss Pirates. Their risky activities include distributing anti-Hitler leaflets, painting over Nazi symbols, and playing prohibited Jazz music. Kurt’s brother insists Kurt is too young to join the group, so privately, Kurt and his Jewish best friend, Fritz, enjoy playing banned Louis Armstrong songs at home together. When Kurt witnesses the abuse Fritz suffers in school for being Jewish, he pulls off his own small, but significant, act of resistance that shows his solidarity to his friend and proves his courageousness to his brother. With warm illustrations in muted tones that wonderfully compliment the sense of the era, this powerful story illuminates a lesser known branch of Nazi dissenters, as well as the difference that one person’s actions can make. An author’s note further explains the historical facts of the Pirates and their efforts to help Jews.”—Association of Jewish Libraries

“The Edelweiss Pirates is indeed an interesting look at a group of resisters that most people have never really heard of, and although they didn’t start out as saboteurs, by 1938, they were beginning to increase their subversive acts against the Nazis. I liked that the story was told from Kurt’s point of view. This coming of age story allows his frustration at not being able to protest the things he is seeing to grow until he must take a stand, even at the risk of severe punishment at school, and possibly at home. Stamatiadi’s earth-toned illustrations are simple, but never let the reader forget that they are reading a book that is set in Nazi Germany by including the symbols of that regime throughout, including the required picture of Hitler in the classroom. At a time when most people were afraid to speak out against the injustices and cruelties they were witnessing on a daily basis, Kurt is an inspiring character, finding his voice and means to protest. This is indeed a picture book for older readers that should resonate with strongly with them even today. Be sure to read the Author’s Note at the back of the book to learn more about the history of the Edelweiss Pirates. You’ll also see that there aren’t any recommendations for age appropriate further reading on this topic because there simply wasn’t anything until The Edelweiss Pirates was published. This book is recommended for readers age 8+
This book was obtained from the author at BookExpo” - The Children’s War

“Kurt’s older brother, Albert, is a member of the Edelweiss Pirates, a group of young people who are dedicated to resisting Hitler’s edicts. Hitler has outlawed jazz music, so the Edelweiss Pirates play it every chance they get. Kurt, who plays the trumpet, asks if he can join the group; Albert refuses but gives him a Louis Armstrong record, which Kurt and his Jewish classmate, Fritz, listen to so much, they can eventually play by ear. At school, Kurt witnesses Fritz’s growing degradations. Finally, at the band concert, Kurt is instructed to play a piece by Wagner, Hitler’s favorite composer. Instead, he breaks out with a riff on Armstrong’s ‘Saint Louis Blues.’ After the concert, he receives a note from Albert with his new code name: ‘Blues.’ Kurt is finally a member of the Edelweiss Pirates.
Like Elvgren’s The Whispering Town (2014), this Jewish story is told from the perspective of non-Jews. The author uses music to demonstrate the increasing loss of freedom suffered during the Holocaust. Her book also weaves a tightly crafted narrative, using first-person point of view and present tense, based on the powerful picture-book formula of threes: Kurt asks to join the Pirates three times, and is shown learning three different subjects at school.
The color palette and style of Stamatiadi’s illustrations effectively evoke the 1930s. Back matter explains the real Edelweiss Pirates, a brave corps of some 5,000 teenagers who defied Nazi Germany and the Hitler Youth.
Recommended for ages 9 to 12.” – Jewish Book Council

“Edelweiss Pirates by JENNI-FER EINGREN, illustrated by DANIELA STAMATIADI, for ages 8 to 12. Kurt and his older brother Albert, who are not Jewish, live in Nazi Germany. Albert resists the Nazis through a group known as the Edelweiss Pirates (an actual resistance group), which Kurt, to his dismay, is too young to join. Both boys are musicians, and both enjoy forbidden music, namely, jazz, which they play and listen to any time they can. Kurt’s best friend is Fritz, who is Jewish. When the boys can get together, they, too, like to play jazz, Kurt on his trumpet, Fritz on his saxophone. In school, Kurt is ashamed of himself for not standing up in class for Fritz. Then, at a school band concert, Kurt finds a way to resist and to stand up to the Nazis. It’s an inspiring story, enhanced by illustrations that suit it well.” – Chicago Jewish Star

Jennifer Elvgren, award-winning author of The Whispering Town and Josias, Hold the Book, is a former print journalist who finds her story ideas in real life. She lives in Albemarle County, Virginia. With her husband, three children Caspian the border collie, Copperfield the foxhound, and Goodnight Moon the American quarter horse.

Daniela Stamatiadi is a graduate of the Athens School of Fine Arts and the illustrator of more than 100 books. In addition to teaching visual arts in private colleges, she also paints and illustrates. She lives in Athens, Greece.