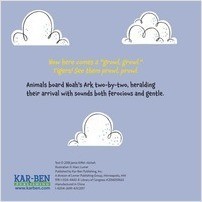 Can You Hear a Coo, Coo?

Was that noise a roar, roar? Lions! Shake the floor, floor.

Animals board Noah’s Ark two-by-two, heralding their arrival with sounds both ferocious and gentle.

“This board book tells the story of Noah’s Ark through simple and amusing illustrations accompanied by a text full of animal sounds and movement words. Reading the book is a lively, interactive learning experience. As children look at the color images of the animals, they can imitate the sounds and motions that the animals make. Only at the end does Noah’s family appear and board the Ark along with their charges, as they enter two by two to avoid the stormy weather.
The story can be used to impart traditional Biblical content or not, as the parent or preschool teacher wishes. Either way, this is a fun shared experience for a child and adult or, perhaps, an older sibling, and is perfect for ages 1 through 5.” – Jewish Book Council

“Surprise, it’s a board book about Noah’s Ark, although readers might not immediately recognize the familiar story. At first glance this cheerful board book seems to be about animal sounds. Pairs of doves, mice, snakes, geese, zebras, monkeys, and tigers move noisily across the pages, two by two. The animal sounds are repeated twice, along with the words they rhyme with, both rendered in uppercase letters. So the mice ‘SKITTER, SKITTER’ and ‘TWITTER, TWITTER,’ while the geese say, ‘GIGGLE, GAGGLE,’ as their tails ‘WIGGLE, WAGGLE.’ Finally, tying this all together, on the second-to-last page, a brown-skinned family in vaguely Middle Eastern dress appears, along with pairs of elephants, horses, sheep, butterflies, worms, and giraffes. Even on the final spread, as the animals troop into the ark, Noah is not named. A rather generic but positive message concludes this abbreviated Bible story: ‘They know that in STORMY WEATHER / friends like these should STAY TOGETHER!’ That ‘stormy weather’ is the only reference to the Flood, and there’s no mention of God. Caregivers who want to disguise their Bible stories may be pleased, while others will be forced to add further explanation on their own. Toddlers will just be happy to repeat the animal noises. A playful, stealth introduction to a familiar tale. (Board book. 1-3)” – Kirkus Reviews

Jamie Kiffel-Alcheh regularly writes for National Geographic KIDS. Her many books include Hard Hat Cat, Kol Hakavod: Way to Go!, A Hoopoe says Oop!, Rah! Rah! Mujadara, Can You Hear a Coo, Coo? and Listen! Israel's All Around. She is also a lyricist for pop songs, advertisements and motion pictures. She lives in Burbank, California.

Marc Lumer is a children's book writer/illustrator and an animator. He worked as a visual development artist on Warner Brothers’ Batman Beyond and Superman as well as on projects for Dreamworks, Disney TV Animation, and others. His previous children’s books include Benny’s Mitzvah Notes, a Sydney Taylor Notable Book. He lives in Los Angeles, California.