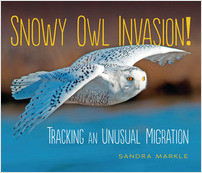 Late in 2013, snowy owls started showing up in places no one expected to find them—including Florida. What had caused so many of these majestic birds to leave their Arctic home and fly to southern Canada and the United States? Scientists quickly began working to find out. Author Sandra Markle brings together firsthand reports from the scientists involved along with stunning photographs of the owls to explain this rare event, known as an irruption. Follow along as scientists figure out why snowy owls took part in this unusual migration and discover what they learned from the unexpected opportunity to study them up close.

The winter of 2013-2014 brought an unprecedented number of snowy owls to the United States. Normally these birds stay all year in the Arctic. Scientists took advantage of the flocks by banding many and attaching transmitters to others in order to study the flight patterns – research that they have not been able to conducted previously.
Because the banding happened so recently, scientists are just beginning to use the data they have been collecting. Because if this, there really isn’t a section about the uses for the research or things that the general populous should be aware of. In that regard, this book is a little less useful than Markle’s other books. Don’t get me wrong – the bandings and transmitter part is cool, just not what I normally expect. And the photographs – top notch!

“[I]nterviews and accompanying photographs set the book apart and bring the story to life. The writing is easy to understand and never boring. . . . An excellent purchase for STEM collections.”—starred, School Library Journal

“A solid pick for aspiring biologists and techno fans alike.”—Booklist

“Markle introduces the birds, the lemmings, and the science in lively, clear prose organized into chapters profusely illustrated with well-captioned photographs.”—starred, Kirkus Reviews 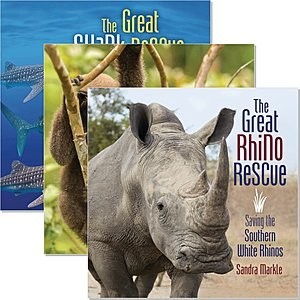