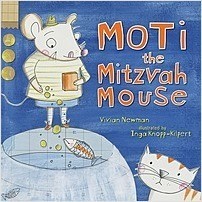 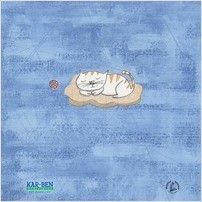 Moti, the busy little mitzvah mouse, works all night, secretly doing good deeds for his human family and his animal friends. Who will do a mitzvah for Moti?

“Moti the Mitzvah Mouse secretly works all night doing good deeds for his human family and animal friends. But what about Moti? Who will do a mitzvah for him?” – Cleveland Jewish News

“Lots of people commit acts of mischief when no one is looking. Moti the mouse secretly commits good deeds. Moti lives under the kitchen sink in the home of a white, Jewish family, but he sometimes sneaks out to perform a ‘mitzvah.’ The term is a traditional Hebrew word for ‘commandment,’ but it is often loosely construed as a synonym for ‘an act of kindness,’ and here it even takes on the connotation of ‘a fun children’s game.’ Moti finds lost toys and gives them back to their owners. He decorates placemats to help celebrate Shabbat. The book turns each mitzvah into a puzzle for readers. When Moti tosses ‘scraps and crumbs’ to hungry animals, the text asks, ‘What mitzvah is Moti doing…?’ and ‘How many birds can you find?’ Some readers will be frustrated that this is more of a puzzle book than a story. Others will be pleased by the lack of conflict. In this book, mice and cats get along and give one another gifts—mostly cheese. The loose, sketchy pictures of the characters by Knopp-Kilpert are endearing. As collaged in on her painterly, textured backgrounds, they almost look like stickers that children could collect. While some readers will want a more substantial plot, others will find Moti and his friends charming and even inspiring. They might even get up in the dark of night to perform good deeds.”—Kirkus Reviews

“Moti is very busy doing mitzvahs around the house. He does these anonymously. For example, he cleans up the crumbs from the floor and then gives them to the birds. He also actively involves the children by asking them to count the birds or tell the name of the toy they returned to the cat.

In the final pages, more abstract mitzvahs such as ‘honoring elders’ or ‘comforting the sick’ are mentioned. Although each is accompanied by a picture, the reader will need to explain the concepts in his or her own words. The book is filled with colorful pictures in a cartoon format. Little ones will be delighted by this sweet book while learning about how to conduct themselves properly.

Inga Knopp-Kilpert is an illustrator based in Stuttgart, Germany. She specializes in collage and line art drawings.