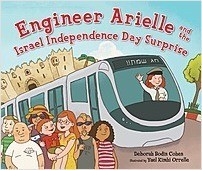 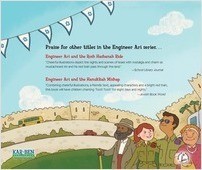 Engineer Arielle drives a train in Jerusalem, just like her great-great-grandfather, Engineer Ari. Except she drives a light rail train, and today is a special day. It’s Israel’s Independence Day! Arielle works all day taking people to their holiday destinations—but how will Arielle celebrate? Her brother Ezra, a pilot in the Israeli Air Force, has something special in mind.

“Engineer Arielle drives a train in Jerusalem, just like her great-grandfather, engineer Ari. The difference is Arielle’s train is a modern light rail train and she’s driving it on a special day – Israel Independence Day. She doesn’t know how she will celebrate the day because she will be busy working, but her brother, Ezra, a pilot in the air force, has someithing planned. Find out what.” – Cleveland Jewish News

“The roof of a train and the roof of the sky deliver a picture book about Israel’s Independence Day. Engineer Arielle, energetic, 21st century, modern, urban train engineer is the great, great granddaughter of Engineer Ari renowned for his adventures driving the first ever train in Jerusalem in the last 19th century (and the star of previous titles Engineer Ari and the Rosh Hashanah Ride, Engineer Ari and the Sukkah Express, Engineer Ari and the Hanukkah Mishap, and Engineer Ari and the Passover Rush). Arielle and her pilot brother, Ezra, here combine in a sweet story about Yom Ha’Atzma’ut, giving libraries a topic rarely covered in picture book stories and readers a link to a favorite hero. While most Israeli natives take a holiday from work to celebrate, Arielle and Ezra take joy in the importance of their work on this special day. The tale sets up a mystery about why everyone will see Ezra no matter where they are. Arielle tapes a poster whose message we cannot see to the roof of her light rail cab. As she drives by buildings and through neighborhoods picking up passengers, readers learn about Jerusalem landmarks, historical events and national holiday customs. The text contains transliteration of Hebrew words. The mobile illustrations in muted colors capture the spirit and pride of the characters and the plot. The climax of the picture book is the actual acrobatic, annual air show, a special flyover all of Israel performed by the Israeli Air Force. Ezra is the lead pilot and as the pilots write Israel across the sky, we discover the poster message on the train roof: ‘Yom Ha’Atzma’ut sameach Ezra.’ A happy holiday and a happy read!”—Association of Jewish Libraries

“A sister and brother celebrate Israel’s Independence Day. Redheaded, white Arielle happily gets ready for her workday because it is a very special day: Yom Ha’Atzma’ut, Israel’s birthday or Independence Day. Her brother Ezra is also getting ready to go to work. Arielle rides her scooter through the colorful streets of Jerusalem and thinks about her great-great-grandfather Ari, who was a conductor on a train from Tel Aviv to Jerusalem over 100 years ago—and who celebrated Passover in Cohen’s Engineer Ari and the Passover Rush (2015) and Sukkot in Engineer Ari and the Sukkah Express (2010), both illustrated by Shahar Kober. Arielle drives a very modern train, but before she starts out, she tapes a poster to the roof of the front car. Many people board the trains, including Arielle’s friends, who want her to join in their activities, but she is going to celebrate with her brother. The train makes many stops in Jerusalem, and Arielle finally sees her brother flying overhead with the Israeli Air Force in planes that spell out ‘Israel’ in their contrails. From his cockpit, Ezra can read the message that his sister has placed on the train—and it is no surprise on this holiday. Orrelle’s bright and splashy art depicts a bevy of happy folk of a variety of skin colors. All is happy and peaceful on this springtime Israeli holiday.”—Kirkus Reviews

“This satisfying addition to the Engineer Ari series springs forward to the present day. Following in the footsteps of her great-great grandfather, Engineer Ari who drove the first steam engine from Jaffa to Jerusalem, Arielle also drives a train, only now it’s Jerusalem’s popular light rail line. As she leaves for work, Arielle wishes her brother Ezra a happy ‘Yom Ha’Atzma’ut!’ in celebration of Israel’s Independence Day, and hints that she’ll see him later. Before beginning her shift, she tapes a large poster to the top of the train, and then takes off on her route through the center of the city. At each stop she greets friends and family who are celebrating the holiday, and when they ask about her holiday plans she says she’ll be celebrating with Ezra. ‘We’ll all celebrate with him!’ Finally a formation of Israeli Air Force planes appears in their annual national flyover, and it is Ezra who is piloting the lead, spotting Arielle’s train from the large holiday greeting she has fixed to the roof.

Time-shifting to modern Jerusalem gives this series a fresh perspective on life in Israel, juxtaposing the old with the new as the sleek train glides by the ancient walls of the Old City and the outdoor market stalls of Machane Yehuda, past the busy central bus station, and across a strikingly modern bridge designed to look like King David’s harp. Illustrator Yael Kimhi Orrelle is new to the series, but manages to maintain the charming simplicity and palette of the original books while highlighting contemporary Israel’s diversity and civic pride.

Yael Kimhi Orrelle was born and raised on a kibbutz in Israel. She fell in love with crayons at the age of two and has been drawing ever since. She is a graduate of Shenkar Collage of Engineering and Design in Israel and has illustrated a number of Israeli children's books. This is her first U.S. published book.