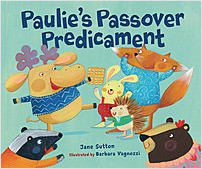 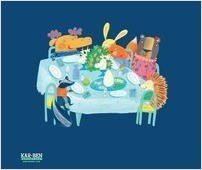 Paulie the moos-ician can hardly wait to host a Passover seder for his friends. Unfortunately, his seder doesn’t turn out quite the way he planned. Will the hunt for the afikomen make the evening a success?

“Paulie the moosi-cian is all set to host a Passover seder for his friends, but the seder doesn’t go according to plan. There are too many mistakes and that makes the hunt for the hidden aﬁ komen a real puzzle.” - Cleveland Jewish News

“Paulie, a moose (and moos-ician) can’t wait for Passover. He’s invited all his friends to join him in a heartfelt, slightly unconventional seder: pepper added to the salt water (so the pepper doesn’t get jealous), pinecones in the charoset, and so on. Even worse, he locks himself in the basement while hunting for the afikomen. Once he manages to free himself, it’s Dayenus all around—it’s enough to be able to celebrate the holiday with cherished friends.
A cheerful addition to the Passover library, this book centers on the idea of friendship and acceptance while also explaining most of the holiday’s symbols and rituals. Buoyant illustrations of a menagerie of animal friends strike just the right note.
Recommended for ages 3 to 7.” -Jewish Book Council

“Not since Bullwinkle has there been as charming a moose as Paulie. Paulie is a moos-ician who cuts his musical practice short in order to prepare a seder for his friends that evening. He is thoughtfulness personified, although a tad misguided, when he uses some unusual items on his seder plate: an ostrich egg for greater visibility, salt water with pepper added (so that the pepper wouldn’t be jealous of the salt), charoset made of apples and pine cones, grass instead of parsley, a radish carved in the shape of a horse to stand in for horseradish, and lamb’s wool instead of a lamb bone. Paulie’s eyes fill with tears when his guests laugh at his seder plate choices. Soon his friends reassure him when they say that ‘Your seder plate is different, but each thing still reminds us of Passover—in a Paulie way.’ All is well as the search for the afikomen ensues until Paulie finds himself and the afikomen stuck in the basement. ‘What a predicament!’ he thought. Paulie is released from his basement bondage when he thinks of a very clever way to signal his guests. Paulie declines a reward for the afikomen. ‘I don’t need one,’ said Paulie. ‘My reward is being free, like our ancestors on Passover. And that’s enough for me!’ Barbara Vagnozzi’s illustrations strike just the right tone. Paulie and his animal friends are colorful and full of expression.” – Association of Jewish Libraries

“Paulie the moose is hosting his first seder, and things aren’t going well. He carves a horse from a radish instead of horseradish for the maror (bitter herbs). He makes the charoset out of apples and chopped pinecones. And he gets stuck in the basement after finding the afikomen. Paulie’s friends can’t help but laugh at his Passover faux pas, but they love him. ‘Each thing [on the seder plate] still reminds us of the meaning of Passover—in a Paulie way,’ says Sally the rabbit. Sutton’s nudges toward the subject matter are often far from subtle (when told he gets a reward for finding the afikomen, Paulie responds, ‘I don’t need one…My reward is being free, like our ancestors on Passover’). But Paulie’s eagerness to get Passover perfect remains endearing, and Vagnozzi’s toylike, apple-cheeked animal cast exudes high spirits and open hearts. Ages 3-8.” – Publisher’s Weekly

“A moose adds his own special culinary touches to the Passover Seder. Paulie, a moose, or “moos-ician,” stops playing his guitar to do last-minute Passover shopping, during which he meets his friends, a rabbit and a hedgehog, who will be joining him. He adds some usual items to his cart such as grape juice and candles, then goes home to cook and set the table. His friends join him, including a skunk and a bear, but they notice that some food items are a little different from what they expected. The egg on the Seder plate is very large—from an ostrich. The salt water also has pepper in it. The charoset has apples and pine cones instead of apples and nuts. Parsley is replaced by grass, and the maror is a radish carved to look like a horse instead of horseradish. Finally, the lamb bone is a ball of wool from a lamb. Close…but….Searching for the afikomen adds drama and meaning to the evening celebration and makes it a happy Passover for the friends. Readers who are familiar with the spring holiday may find some of the antics amusing. Those who are new to it will likely be confused, particularly as a diagram of a Seder plate with the correct assemblage is not included to help orient them. The animals are all colorfully comic, however. Less than fun and more than silly. (Picture book/religion. 3-5)" – Kirkus Reviews

Jane Sutton grew up in Rosyln, New York, where she began writing stories and poems at a young age. Jane is also a writing tutor and teaches a community education class for adults about how to write for kids. She, her husband, and her grown children live in the Boston area.

Barbara Vagnozzi loves illustrating, especially inventing funny animals. She enjoys giving presentations, where she can tell stories to little ones near her home in Bologna, Italy.