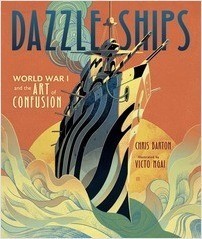 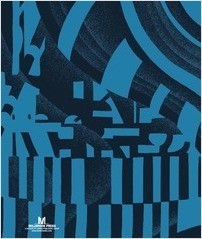 World War I and the Art of Confusion

A visually stunning look at innovative and eye-popping measures used to protect ships during World War I.

During World War I, British and American ships were painted with bold colors and crazy patterns from bow to stern. Why would anyone put such eye-catching designs on ships?

Desperate to protect ships from German torpedo attacks, British lieutenant-commander Norman Wilkinson proposed what became known as dazzle. These stunning patterns and colors were meant to confuse the enemy about a ship’s speed and direction. By the end of the war, more than four thousand ships had been painted with these mesmerizing designs.

Author Chris Barton and illustrator Victo Ngai vividly bring to life this little-known story of how the unlikely and the improbable became just plain dazzling.

“Chris Barton and Victo Ngai’s Dazzle Ships gives young readers an introduction to World War I in a clever and colorful way.”—Shelf Awareness

“The well-written, intriguing text is complemented by Ngai’s vibrant and surreal illustrations. . . . With the commemoration of the centenary of World War I, this book is a fascinating selection that will captivate readers, especially war story enthusiasts.”—starred, School Library Journal

“[An] inspiring story of creativity.”—Booklist

“[A] fascinating volume about a little-known side of the war. An eye-catching title sure to dazzle.”—Kirkus Reviews

Victo Ngai is a Los Angeles-based illustrator from Hong Kong. "Victo" is neither a boy nor a typo, but a nickname derived from Victoria—a leftover from the British colonization. Ngai's work has appeared in books, newspapers, magazines, advertisements, and animations. Among her many clients are The New York Times, The New Yorker, Wall Street Journal, General Electric, Lufthansa, Johnnie Walker, Apple, IMAX, MTA Art and Design, McDonald's, and Tor Forge. Ngai has received numerous honors, including Forbes 30 Under 30, The Society of News Design, The Society of Publications Designers, Communication Arts, Spectrum Fantastic, and the Society of Illustrators of New York. She's a current nominee for the Hugo, Locus, and Chesley awards.