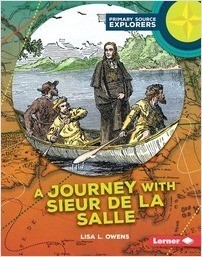 From the Series Primary Source Explorers

In 1666 Sieur de La Salle left France and sailed across the Atlantic Ocean to New France, a colony in present-day Canada. He wanted to explore new lands and even sail to China. On La Salle’s most famous expedition, he traveled down the Mississippi River and claimed the Louisiana Territory for France. How do we know about La Salle’s journeys and the native peoples he encountered along the way? Through letters, maps, and images recorded by La Salle and his companions! Travel with La Salle across oceans and beyond and explore primary sources to learn more.

“The writing is simple and direct, though rich with detail. Potentially problematic topics, such as the treatment of Indigenous people by invaders, are handled sensitively and honestly. . .These are first-rate research materials presented with much care for reluctant readers.”—School Library Journal, Series Made Simple

This dynamic series is packed with primary sources (letters, journal excerpts, maps, and objects from the period) to give readers new insight about some of the most studied explorers of the world. Each engaging title helps readers understand the historical context and consider the point… View available downloads →