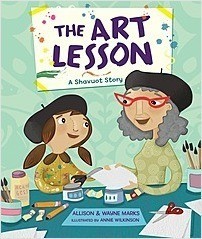 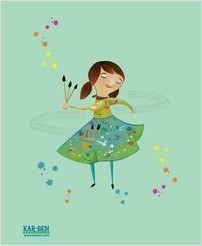 Shoshana loves spending time at Grandma Jacobs’ art studio and for Shavuot, Grandma Jacobs has a very special art project in mind! Shoshana learns how to make papercuts by carefully folding squares of paper and cutting shapes out of them. But can she create works of art as beautiful as the ones Grandma makes?

“What could be better to bring home the meaning of a Jewish holiday, especially the spring harvest holiday of Shavuot, which shows God’s gift of Torah to the Jewish people, than a book about making art! Shavuot is usually celebrated either by staying up one night of Shavuot studying Torah and/or by creating an art work. This book is about the making of paper cuts depicting various aspects of the holiday and the authors and illustrator show how it can be done. Grandma J is an art teacher who is totally proficient in creating paper cuts of magnificent design. She shares her skill and her love of art with her granddaughter, Shoshana, as they create special designs for Shavuot and skills for a lifetime of creativity. The technique is demonstrated in a series of colorful pictures illustrating the text. A nice touch is that the creation of several pieces are all learned as the reader watches the process of the girl growing up, who later shares what she has learned with her own granddaughter. It is a colorful book with many dimensions and filled with imagination. Don’t be surprised if it inspires creativity in the reader, as well.”—Jewish Book Council

“This story is based on Eastern European Jews’ custom of decorating their windows with Jewish-themed papercuts during the Shavuot holiday. Children should enjoy this cleverly imagined tale of a girl who loves spending time doing art projects with her talented grandmother. Young Shoshana dresses in her treasured artist’s smock and black beret for her weekly visit to the home of Grandma Jacobs, who stocks an art studio that would enchant any child. Calling her granddaughter ‘My little Chagall’ or ‘My little Modigliani,’ she stirs creative juices as she instructs Shoshana how to make papercuts — ‘something my bubbe taught me how to do when I was a little girl.’ When Shoshana gets frustrated with what she believes are meager efforts, her grandmother encourages her to use her imagination to define success and states lovingly that ‘Every papercut is special. Just like you.’ Adults will appreciate the various references to famous artists’ styles that the illustrator has hidden among the pages, helped by an author’s note explaining Grandma Jacobs’ use of nicknames. Simple instructions for a Star of David papercut are included.”—Jewish Journal

Wayne Marks has worked as a proofreader and copywriter for 30 years. Wayne plays fiddle in a local Irish group and writes and records novelty tunes with the band, The Brothers Marks, played on the Dr. Demento Show and other podcasts. Together with his wife, he has co-written award-winning children's books.

Allison Marks worked for over two decades as the librarian at Temple Israel in Akron, Ohio. She also reviewed Jewish children's books for the Association of Jewish Libraries newsletter. Alongside her husband, she has co-written multiple books, such as Og's Ark and The Art Lesson.

Annie Wilkinson, the youngest of eight children and the mother of two, was raised in Saskatchewan. She works in a variety of mediums including traditional and digital, creating bright and whimsical illustrations for both books and products. She also has a background in design and as a fine artist, two skills that she calls upon quite frequently when illustrating. She lives in Vancouver, British Columbia.