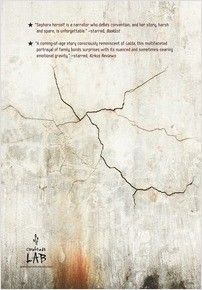 “Once there was a mermaid who dared to love a wolf. Her love for him was so sudden and so fierce that it tore her tail into legs.”

Sephora Golding lives in the shadow of her unbelievably beautiful mother. Even though they scrape by in the seedier part of Venice Beach, she’s always felt lucky. As a child, she imagined she was a minor but beloved character in her mother’s fairy tale. But now, at sixteen, the fairy tale is less Disney and more Grimm. And she wants the story to be her own.

Then she meets Felix, and the fairy tale takes a turn she never imagined.

“Things don’t really turn out the way they do in fairy tales. I’m telling you that right up front, so you’re not disappointed later.”

Sometimes, a story is just a way to hide the unspeakable in plain sight.

“A novel that is as artful as it is emotionally disconcerting.”—The Bulletin of the Center for Children’s Books

“[T]his is a book so fantastically excellent that I fear it may reduce me to a gushing disaster, that I’ll have to resort to just throwing copies at peoples’ heads rather than using actual words to describe my love for it….absolutely stellar.”―Kirkus Reviews Blog

“…Sephora’s painful journey and its lack of easy answers will stick with readers, as will its razor-sharp commentaries on sexual and societal double standards.”—Publishers Weekly

“Sephora herself is a narrator who defies convention, and her story, harsh and spare, is unforgettable.” —starred, Booklist

“Arnold’s fresh and exciting plot twist is unexpected, elevated by the lyrical writing style…. A well-written and evenly paced dramatic tale about finding peace in ones own situation.” —School Library Journal

“Raw and dreamy, tragic and brilliant, Infandous is both about a girl trapped within her own dark fairytale and the cruel fairytale that all girls are trapped inside. There’s no looking away as Arnold’s astute heroine journeys through the thorny myth and riddle of her sexuality. How can she own what she’s given up or lost? How can she not feel taken?” —Stephanie Kuehn, Morris Award-winning author of Charm & Strange

Elana K. Arnold is the author of several books for young readers. She lives in Huntington Beach, California, with her husband, two children, and a menagerie of animals.