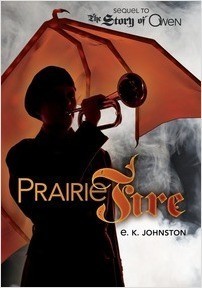 Listen! For the song of Owen Thorskard has a second verse.

Every dragon slayer owes the Oil Watch a period of service, and young Owen was no exception. What made him different was that he did not enlist alone. His two closest friends stood with him shoulder to shoulder. Steeled by success and hope, the three were confident in their plan. And though Siobhan McQuaid was the first bard in a generation, she managed to forge a role for herself and herald Owen as a new kind of dragon slayer for a new kind of future.

But the arc of history is long and hardened by dragon fire. Try as they might, Owen and his friends could not twist it to their will. Not all the way. Not all together.

Listen! I am Siobhan McQuaid. I know the cost of even a small bend in the course of history. Listen!

“This story is a must for those who loved the first book and want to continue with the story.”—VOYA

“Johnston isn’t afraid to write for a world where happy endings are rare, but there is such grace and dignity that heartbroken readers will likely forgive [her].”—The Bulletin of the Center for Children’s Books

“There is a little something for everyone in this sequel to the acclaimed The Story of Owen (Carolrhoda Lab, 2014)….A fantasy YA novel that steers clear of love triangles, teen angst, and a tidy ending is hard to come by; Prairie Fire and its prequel are must-haves.”―School Library Journal

“In this sequel to the alternate-universe contemporary fantasy The Story of Owen….it is Siobhan’s transformation into a star in her own right that will stay with readers.”―The Horn Book Magazine

“Johnston’s solid writing will keep [readers] engaged with her smooth blend of fantasy and realism, all anchored by Siobhan’s determined personality and her solid friendship with Owen and his team.” —Booklist