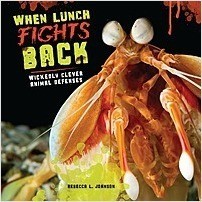 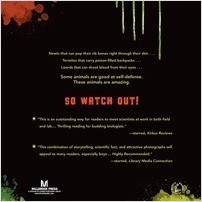 When Lunch Fights Back

The octopus spies a nice, tasty mantis shrimp. It swims over for a closer look at the small creature. Then—WHAM!—the mantis shrimp strikes a nasty blow with its hammer-like forelimb. The octopus shrinks back, defeated. That wasn’t such an easy meal after all . . .

In nature, good defenses can mean the difference between surviving a predator’s attack and becoming its lunch. Some animals rely on sharp teeth and claws or camouflage. But that’s only the beginning. Meet creatures with some of the strangest defenses known to science. How strange? Hagfish that can instantaneously produce oodles of gooey, slippery slime; frogs that poke their own toe bones through their skin to create claws; young birds that shoot streams of stinking poop; and more.

“This combination of storytelling, scientific fact, and attractive photographs will appeal to many readers, especially boys….Highly Recommended.”―starred, Library Media Connection

“From the award-winning science author Johnson comes another somewhat gross but definitely engrossing book…. Some of the animals are featured in other similar books, but few bring them together with such a punch.” —Booklist

“This title explodes with fascinating facts and action-packed photographs that convey how different creatures have evolved to escape predators…. A visually stimulating and informative addition.” —School Library Journal

“This is an outstanding way for readers to meet scientists at work in both field and lab…. Thrilling reading for budding biologists.” —starred, Kirkus Reviews