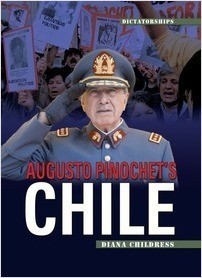 Augusto Pinochet, commander-in-chief of Chile’s army, rose to power in 1973 when he participated in a military coup to overthrow the president, Salvador Allende. Allende was a Socialist, and the upper classes and the military feared that Socialism would lead to a takeover of the country by the Communist Soviet Union. On September 11 of that year, the military attacked the presidential palace, and Allende committed suicide. Pinochet took charge of the junta formed to rule, naming himself president. Military personnel controlled all phases of the government and industry, and the junta shut down the Congress. National police were stationed on almost every block to enforce curfews and keep order, arresting thousands of Socialists and other “enemies of the state.” Many were tortured, many were exiled or fled into exile, and many just disappeared. The secret police even assassinated opponents outside the country. Pinochet ruled the country with an iron fist for seventeen years even as he brought reforms that stabilized the economy. Increasing unrest and economic problems eventually forced him from office. He was arrested when in Great Britain a few years later and charged with murder and other crimes against humanity. Released for medical reasons, he returned to Chile. He died there in 2006, under indictment for murder and other crimes. Read this book to learn how a trusted military leader became a ruthless dictator, all in the name of protecting his country.