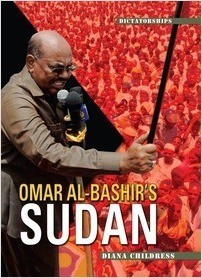 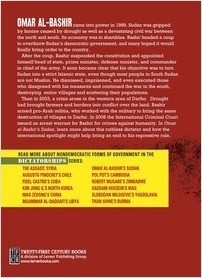 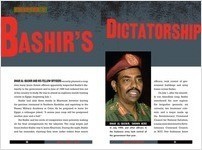 Omar al-Bashir came into power in 1989. Sudan was gripped by famine caused by drought as well as a devastating civil war between the north and south. Its economy was in shambles. Bashir headed a coup to overthrow Sudan’s democratic government, and many hoped it would finally bring order to the country. After the coup, Bashir suspended the constitution and appointed himself head of state, prime minister, defense minister, and commander in chief of the army. It soon became clear that his objective was to turn Sudan into a strict Islamic state, even though most people in South Sudan are not Muslim. He dismissed, imprisoned, and even executed those who disagreed with his measures and continued the war in the south, destroying entire villages and scattering their populations. Then in 2003, a crisis arose in the western area of Darfur. Drought had brought farmers and herders into conflict over the land. Bashir armed pro-Arab militia, who worked with the military to bring the same destruction of villages to Darfur. In 2008 the International Criminal Court issued an arrest warrant for Bashir for crimes against humanity. In Omar al-Bashir’s Sudan, learn more about this ruthless dictator and how the international spotlight might help bring an end to his repressive rule.