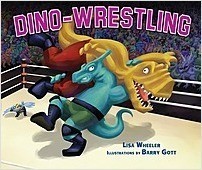 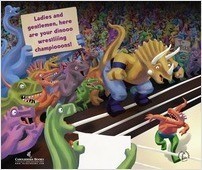 The Dino-Wrestling Jamboree is ON! Dinos compete in all styles of wrestling at this gigantic event.

Allo and Ankylo grapple in a folkstyle match. Lucha Libre fans go wild as the masked Tarbosaurus takes on Iguano. Tricera and Gigano loom large on the sumo dohyo, while over in the freestyle tent, Leso and Compy battle for the pin. Just what will happen when the Diplo and Ptero tag teams rumble in the WWD fight? You won’t want to miss this action!

Dinosaurs face off in prehistoric sports competitions—from baseball to wrestling and every sport in between! Will the plant-eaters become the champions? Or will the meat-eaters be victorious? Fast-paced, rhyming commentary and exuberant illustrations put readers right in the action. Sure to thrill dinosaur lovers and sports fans alike!

“Combining spot-on rhythms and rhymes with a narrative style that is akin to a sports announcer, the verses fly by as the dinosaurs gather to watch and participate in the Dino-Wrestling Jamboree….Young wrestlers will find all the action and moves they are seeking within these pages.” —Kirkus Reviews

“Many a little reader will do a victory dance in the stacks for this combination of dinosaurs and hand-to-hand combat.” —Booklist Online

“The illustrations do a great job of depicting wrestling moves, the action in general, and spot-on facial expressions….This action-packed, informational book will be snapped up by lovers of Wheeler and Gott’s previous dino-sports titles, and by newcomers.” —School Library Journal

Lisa Wheeler is the award-winning author of the Dino-Sports and Dino-Holidays books. When she isn't running around the country visiting schools, standing at podiums, and eating airport snacks, she resides in Michigan.

by Megan Ciskowski, Associate Publicist The winter holidays have come to a close, but that doesn’t mean more aren’t on the way. Lerner has come prepared to give young readers a dino-mite Valentine’s Day with the newest title of the Dino-Holidays series. Read on to find out what our… View → 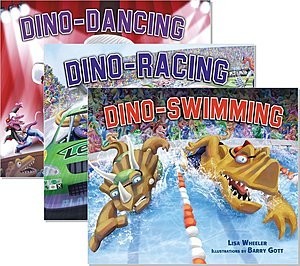