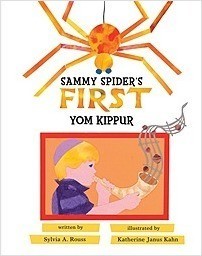 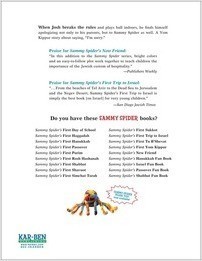 When Josh breaks the rules and plays ball indoors, he finds himself apologizing not only to his parents, but to Sammy Spider as well. A Yom Kippur story about saying, “I’m sorry.”

“The focus is fully on the meaning of Yom Kippur, making this title both more concise and more powerful. The ideas of making poor choices and making amends are shown in a developmentally appropriate way, and the depiction of the custom of formally asking forgiveness is emotionally satisfying.” — School Library Journal

“Kar-Ben Publishing, a division of Lerner Publishing Group headquartered in Minneapolis, continues to release a variety of delightful holiday books for young readers. Among the offerings this year are a well-intentioned puppy, an apologetic Sesame Street character and two books from the Sammy Spider series.

Mitzi’s Mitzvah
Mitzi is a very happy dog who loves to see her friends at Shalom Home. In this story, she visits during Rosh Hashana and helps the elderly residents celebrate the Jewish New Year.

And she brings her ‘doggie New Year wishes,’ which include ‘wagging, snuggling, giving kisses’ and even licking some empty dishes.

The illustrations by Holli Conger are wonderfully unique and capture the spirit of this good-natured and loving dog that author Gloria Koster, a school librarian and children’s book reviewer, has created.

I’m Sorry, Grover
I’m Sorry, Grover is the final volume in the Shalom Sesame series, which is a partnership between Kar-Ben and the Sesame Workshop (9-28-12AJW). In this adventure, Grover and Cookie Monster are in Israel to celebrate Rosh Hashana with their friends.

Among Grover’s Israeli friends is a monster named Brosh who has lost his favorite wooly cap – and suspects someone may have taken it. In his search to find it, Brosh learns a valuable lesson about how to say ’I’m sorry’ and be a better friend in the new year.

This book continues the tradition of well-told stories and familiar Sesame Street characters who learn new things and meet new friends in the Jewish state. And in addition to some information about the authors at the end, the book also includes some basics about Rosh Hashana.

Sammy Spider’s First Book of Jewish Holidays
This first Sammy Spider book, released in honor of the character’s 20th anniversary, is designed for the newest members of the tribe. With simple text and colorful illustrations, the popular Sammy Spider learns the basics of what is celebrated each holiday.

Rouss chooses the major holidays, from Rosh Hashana to Shavuot, and each page includes an accompanying image. It’s a great way to identify each holiday with one simple fact.

Sammy Spider’s First Yom Kippur
Even though spider’s don’t go to synagogue and don’t blow shofars, Sammy Spider is very curious about the shofar Josh Shapiro has made at school. Sammy’s curiosity leads his mother to tell him all about Yom Kippur, the holiday on which people tell each other they are sorry for hurtful things they have said or done.

Sammy Spider learns even more about the holiday as he observes Josh do something naughty. Both Josh and Sammy learn a valuable lesson about apologies and forgiveness.

This book has a lovely story to illustrate the holiday of Yom Kippur, complemented by Katherine Janus Kahn’s one-of-a-kind artwork. And it includes some additional information about the holidays at the end.” — American Jewish World

“Filled with lively illustrations, children will be engrossed by this animated tale, while they learn the importance of reconciliation.” — Jewish Journal

Sylvia A. Rouss is an award-winning author and early childhood educator, and the creator of the popular Sammy Spider series, celebrating its 25th anniversary with over half a million Sammy Spider books sold. She lives in California.