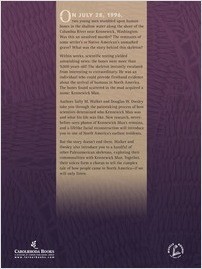 Kennewick Man and the Paleoamerican World

On July 28, 1996, two young men stumbled upon human bones in the shallow water along the shore of the Columbia River near Kennewick, Washington. Was this an unsolved murder? The remnants of some settler’s or Native American’s unmarked grave? What was the story behind this skeleton?

Within weeks, scientific testing yielded astonishing news: the bones were more than 9,000 years old! The skeleton instantly escalated from interesting to extraordinary. He was an individual who could provide firsthand evidence about the arrival of humans in North America. The bones found scattered in the mud acquired a name: Kennewick Man.

Authors Sally M. Walker and Douglas W. Owsley take you through the painstaking process of how scientists determined who Kennewick Man was and what his life was like. New research, never-before-seen photos of Kennewick Man’s remains, and a lifelike facial reconstruction will introduce you to one of North America’s earliest residents.

But the story doesn’t end there. Walker and Owsley also introduce you to a handful of other Paleoamerican skeletons, exploring their commonalities with Kennewick Man. Together, their voices form a chorus to tell the complex tale of how humans came to North America—if we will only listen.

“This title is hard to put down once you start it. This would be an excellent addition to every school library.” —starred, Library Media Connection

“[F]or serious readers who delight in forensic investigation or perhaps consider a future in the field, this material will push their understanding further than most titles on this subject for youth readership.” —The Bulletin of the Center for Children’s Books

Chance discovery of human bones on the banks of the Columbia River prompted a police investigation and led to the discovery that the bones were more than 9,000 years old! “Even though this narrative begins with the discovery of bones, it is ultimately the tale of a human life, of a strong man who overcame great physical pain, of someone who was, above all, a survivor. It might also be part of a tale of how humans came to North America.” The story of what scientists learned from studying the bones is gripping.

“Enhanced by maps and diagrams as well as photos of discovery sites, remains, and scientists at work, this account imparts a clear sense of how hard and subtle that work is—and how exciting, too.” —Booklist

“Walker and Owsley… build the narrative clue by clue, first in determination of the find’s importance, then through a richly detailed portrait of the practice of anthropology.” —The Horn Book Magazine

On July 28, 1996, two young men stumbled upon human bones in the shallow water along the shore of the Columbia River near Kennewick, Washington. Was this an unsolved murder? The remnants of some settler’s or Native American’s unmarked grave? What was the story behind this… View available downloads →