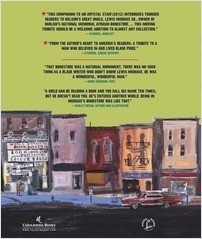 In the 1930s, Lewis’s dad, Lewis Michaux Sr., had an itch he needed to scratch—a book itch. How to scratch it? He started a bookstore in Harlem and named it the National Memorial African Bookstore.

“Studded with Michaux’s aphorisms . . . the book successfully conveys the vibrancy of the bookstore and its habitués. . . . R. Gregory Christie . . . is here allowed full pages drenched with expressionistic color to convey the spirit of the place, time, and people.”—The Horn Book Magazine

“Writing in the voice of Michaux’s admiring son, Nelson illuminates Lewis’s generosity . . . and his fervent belief in the power of words and books to change lives. . . . It’s an emotive tribute to Michaux’s personal and professional legacy.”—Publishers Weekly

“From the author’s heart to America’s readers: a tribute to a man who believed in and lived black pride.”—starred, Kirkus Reviews

“A strong endorsement of the power of books and reading, an excellent choice for history and biography collections, and a strong choice for educators emphasizing the importance of community.”—School Library Journal