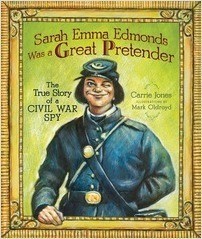 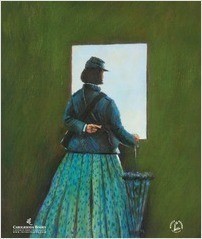 The True Story of a Civil War Spy

Sarah Emma Edmonds started pretending at a very early age. Her father only wanted sons, so Sarah pretended to be one. Unlike most kids, though, Sarah never really stopped pretending. In 1861, during the U.S. Civil War, Sarah pretended her way into the Union Army, becoming a male nurse named Frank Thompson. Being a nurse didn’t quite satisfy “Frank,” though. She wanted to keep her fellow soldiers from getting hurt. So when the Union Army needed a spy, she leapt at the chance. While still pretending to be Frank, Sarah also pretended to be a male African American slave, a female Irish peddler, and a female African American laundress. She slipped behind enemy lines time after time, spied on the Confederate Army, and brought back valuable intelligence to the Union. Sarah was not only good at pretending; she was also very brave. Later in life, Sarah Emma Edmonds wrote a book to tell her story. She explained, “I am naturally fond of adventure, a little ambitious, and a good deal romantic.” She was also truly a great pretender.

“Sarah Edmonds, disguised as a man, fought alongside and spied for Union troops during the Civil War. Jones enumerates these feats with touches of humor, and she continues Sarah’s story throughout the war and her subsequent marriage. Oldroyd makes effective use of broad, rough-hewn brush strokes, particularly in creating an impressionistic background that frequently allows a detailed illustration of Sarah to take center stage.” —The Horn Book Guide

“Great things can come from games of make-believe!” —ForeWord Magazine

“Accessible to younger children than most books on the Civil War, this would be a good addition to many collections.” —Booklist

“Jones succeeds in keeping the complicated narrative at a level appropriate for young readers. Based on Edmonds’s own writings as well as secondary sources, the book presents a believable account of the woman’s actions. While some speculation is included as to her motivations, the text makes clear what is known and what is not. The illustrations portray Edmonds’s feelings through her expressions and provide a visual context for readers. Employing a palette heavy on blues, yellows, and greens, with white outlining for emphasis, the pictures are impressionistic with realistic details. An unusual heroine, Edmonds will capture readers’ attention.” —School Library Journal

“Jones makes a confident departure from her bestselling YA novels with an entertaining and powerful Civil War–era story about living by one’s own rules…. In Oldroyd’s full-bleed spreads, characterized by strong cross-hatching and angular shapes, Edmonds’s eyes twinkle with her secret knowledge, while Jones delivers her story with the assuredness of a natural storyteller.” —Publishers Weekly

“Jones, in her first departure from novels for teens, tells Sarah’s story with strong simplicity, quoting at times from Sarah’s own memoirs…. Oldroyd’s illustrations convey Sarah’s likeness through all her many disguises, and help readers will see her as both sympathetic and brave. Recommended, especially for middle grades studying the Civil War.” —Kirkus Reviews

Carrie Jones is the New York Times bestselling author of the NEED series and spends her time in Maine where she lives with her family, which includes a kitten named Sparta, an obese cat, and two very silly and very large white dogs. She has won numerous awards for her writing and photographs, but she would prefer to win cowboy hats.

Mark Oldroyd lives in the small town of Battle in England. Mark is well known for his atmospheric, detailed illustrative style and his beautiful sense of color and composition.