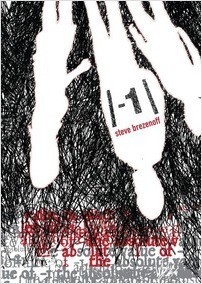 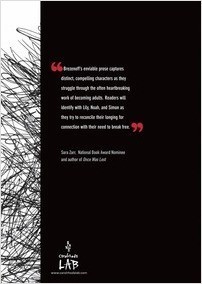 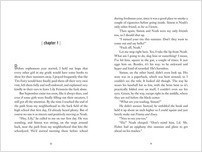 The Absolute Value of -1

Noah, Lily, and Simon have been a trio forever. But as they enter high school, their relationships shift and their world starts to fall apart. Privately, each is dealing with a family crisis—divorce, abuse, and a parent’s illness. Yet, as they try to escape the pain and reach out for the connections they once counted on, they slip—like soap in a shower. Noah’s got it bad for Lily, but he knows too well that Lily sees only Simon. Simon is indifferent, suddenly inscrutable to friends. All stand alone in their heartache and grief.

“At times raw with emotion…, the story compellingly explores how teens connect with one another and how they view themselves. Many readers will relate to the feelings of isolation and lack of hope portrayed here. Edgy and gritty, Brezenoff’s YA debut reads like a cross between the screenplay for Cruel Intentions and some of Robert Cormier’s novels.” —Booklist

“Lily, Noah, and Simon are teenagers attending classes (when they aren’t skipping to smoke cigarettes) at a Long Island high school. When family issues and the pressures of becoming an adult complicate their once-simple friendships, each deals with the changes differently. Lily worries that her love of math will betray her slacker reputation, Noah retreats to his basement to avoid an abusive father, and Simon joins the track team to get healthy and pursue a ‘normal’ girl. The characters narrate the same events but from their own unique perspectives. As the story unfolds and the plotlines interweave, the profound and poignant realization comes to light: how deeply can you know another person—even a best friend? A series of misunderstandings, unspoken truths, and angry outbursts claw away at the trio. As they drift apart, they struggle to balance emotional wounds with the need to create their own identities.” —The ALAN Review

“The Absolute Value of –1 begins with Suzanne Fisher viewing the audience at her father’s memorial service. In front is her high school sophomore brother, Simon; his girlfriend, Lily, to whom he is indifferent; and best friend for lack of any other, Noah. In three chapters narrated respectively by Lily, Noah, and Simon, these friends talk about how they met, who crushes on whom, how they began smoking cigarettes and weed, and their unrequited love. Underlying each teen’s external story is the story that must remain hidden. Noah hates his father so much that he picks fights, most of which Noah loses. Lily’s mother is uncaring and absent. Simon’s father is diagnosed with pancreatic cancer, a condition Simon will not accept. Noah, aka Noah Smoka, is the druggie, Lily the goth, and Simon the strange, emotional poet. Inexplicably, Brezenoff’s book kept this reviewer reading. There is no major action. The characters are sad but do not elicit sympathy. Many events are told from at least two points of view, not necessarily adding any new dimensions. While Simon’s father ultimately dies, the reader knows this from page one, so there is no denouement. Unrequited love among the three teens is a recurring theme, yet it generates no emotion. Noah, Lily, and Simon are merely three teenage smokers, confused about life. Even Simon’s ultimate metamorphosis into a ‘normal’ teen is anticlimactic. Having said that, The Absolute Value of –1 still kept this reviewer’s attention, so it might be a sleeper.” —VOYA

“Each of the three teenagers has a turn at first-person narration, revisiting the same scenario from different perspectives. Brezenoff nicely differentiates their voices and personalities, even while their narratives are bound together by the frustrations, self-doubt (and hatred), and pain they share.” —Publishers Weekly

Steve Brezenoff has written several chapter books for young readers, and The Absolute Value of -1 is his first novel for teens. Though Steve grew up in a suburb on Long Island, he now lives with his wife, their kids, and their terrier, in St. Paul, Minnesota.