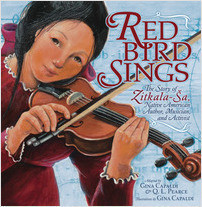 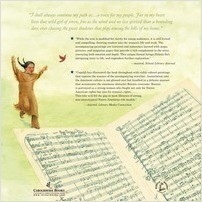 The Story of Zitkala-Ša, Native American Author, Musician, and Activist

“I remember the day I lost my spirit.” So begins the story of Gertrude Simmons, also known as Zitkala-Ša, which means Red Bird. Born in 1876 on the Yankton Sioux reservation in South Dakota, Zitkala-Ša willingly left her home at age eight to go to a boarding school in Indiana. But she soon found herself caught between two worlds—white and Native American.

At school she missed her mother and her traditional life, but Zitkala-Ša found joy in music classes. “My wounded spirit soared like a bird as I practiced the piano and violin,” she wrote. Her talent grew, and when she graduated, she became a music teacher, composer, and performer.

Zitkala-Ša found she could also “sing” to help her people by writing stories and giving speeches. As an adult, she worked as an activist for Native American rights, seeking to build a bridge between cultures.

The coauthors tell Zitkala-Ša’s life by weaving together pieces from her own stories. The artist’s acrylic illustrations and collages of photos and primary source documents round out the vivid portrait of Zitkala-Ša, a frightened child whose spirit “would rise again, stronger and wiser for the wounds it had suffered.”

“Sheet music, maps, and photographs are thoughtfully incorporated into the acrylic illustrations in this emotion-stirring biography.” —The Horn Book Guide

“This title will fill the gap in most libraries of strong, non-stereotypical Native American role models.” --Library Media Connection

“Zitkala-Sa is…an interesting figure…and one who rarely turns up in collective or individual biographies; this account offers insight not just into her achievements but into the complexity of identity.” —The Bulletin of the Center for Children’s Books

“While the text is modified for clarity for young audiences, it is still lyrical and compelling, drawing readers into the woman’s life and work. The accompanying paintings are textured and sometimes layered with maps, pictures, and magazine pages that provide a rich complement to the story, conveying both emotion and depth. This unique format brings Zitkala-Ša’s intriguing story to life, and engenders further exploration.” —School Library Journal

“An important figure of myriad talents, Zitkala-Ša and her life and works are brought to needed attention here.” —Kirkus Reviews

“Drawing from semiautobiographical stories that Zitkala-Sa wrote for the Atlantic Monthly in the early 1900s, Capaldi and Pearce eloquently describe her experience at a Quaker boarding school, where she laments the loss of her culture, but also develops passions for violin and women’s suffrage…. Capaldi’s understated illustrations integrate solid colors and doll-like characterizations with reproductions of period materials, while appended information on Zitkala-Sa rounds out this fascinating portrait.” —Publishers Weekly

As a freelance artist, Gina Capaldi has both written and illustrated books that range from nonfiction, educational, and picture books. Her favorite published works are her historical nonfiction, such as A Boy Named Beckoning: The True Story of Dr. Carlos Montezuma, Native American Hero. One of Gina's earlier books on American Indians has been recommended for elementary school social studies curriculum in the Virginia School systems. Gina Capaldi attended Malibu's Pepperdine University; Art Center & College of Design in Pasadena, California; and Pitzer College in Claremont, California.

Q. L. Pearce is the author of more than 100 nonfiction books for children on the subjects of science, literature, history, and values. Her published fiction includes more than a dozen collections of scary stories and mysteries. Q is the Assistant Regional Advisor in the Orange County region of the Society of Children's Book Writers and Illustrators in Southern California.

“I remember the day I lost my spirit.” So begins the story of Gertrude Simmons, also known as Zitkala-Ša, which means Red Bird. Born in 1876 on the Yankton Sioux reservation in South Dakota, Zitkala-Ša willingly left her home at age eight to go to a boarding school in… View available downloads →