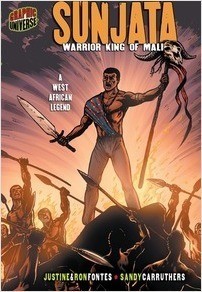 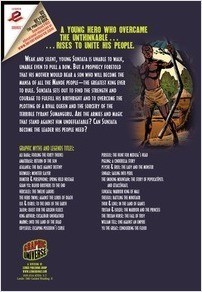 A young hero who overcame the unthinkable rises to unite his people. Weak and silent, young Sunjata is unable to walk, unable even to pull a bow. But a prophesy foretold that his mother would bear a son who will become the mansa of all the Mande people—the greatest king ever to rule. Sunjata sets out to find the strength and courage to fulfill his birthright and to overcome the plotting of a rival queen and the sorcery of the terrible tyrant Sumanguru. Are the armies and magic that stand against him undefeatable? Can Sunjata become the leader his people need?

“A fun, inviting way to introduce students to the beliefs and histories of other cultures.” —Book Links

Justine Fontes was born in New York City. She grew up on Long Island and later graduated Phi Beta Kappa with a B.A. in English Liternature from New York University. Justine found her first job in publishing while she was a Freshman. She worked at various publishing houses before becoming a freelance writer. At Little Golden Books, Justine met her future husband, Ron Fontes. They started writing together and have written over 500 children's books. Justine and Ron moved to Maine in 1988.

Ron Fontes was born in Los Angeles. He grew up in Clarksville, Tennessee, where his mother taught him to read at age 4. By 16, Ron had a science fiction comic strip in the local newspaper. He was a theater major at Austin Peay State University, where he costumed and performed in many shows while working at a printing company to pay for school. Ron went on to act in film before becoming an advertising executive, and he then moved to New York City and worked for Whitman Comics and Marvel. Ron is a prolific artist and co-author of over 500 children's books with his wife, Justine.