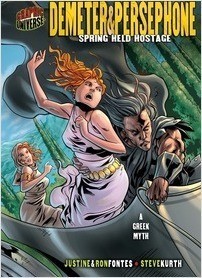 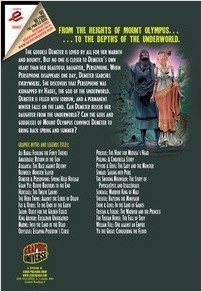 This graphic novel tells the story of Demeter, the Greek goddess of the harvest, and her daughter, Persephone. Demeter rules over a perpetual summer on earth, where crops, trees, and flowers grow in abundance. Persephone, young and beautiful, unknowingly attracts the attention of the lonely god of the Underworld, Hades. Hades kidnaps Persephone, and a frantic Demeter searches in vain for her daughter. Finally, Demeter retreats to her temple in mourning. The goddess’s sorrow causes the crops to die and the ground to freeze. The first winter falls over Greece. As people begin to starve, the other Olympian gods and goddesses try to convince Demeter to accept a marriage between Persephone and Hades. But Demeter will not give up her daughter forever to the Underworld. Finally a compromise is struck: Persephone will stay with Hades for half a year (winter). When she comes back from the Underworld to spend half a year with her mother, spring returns to earth.

“The artwork is excellent throughout. . .” —School Library Journal

“Reluctant readers have much to appreciate in the dynamic and colorful format of these comic books, while being exposed to complex themes such as sibling rivalry and family obligations. Because they include end material such as glossaries, pronunciation guides, and further reading, these books are ideal resources for a younger reader interested in an introduction to world myths.” —VOYA

Justine Fontes was born in New York City. She grew up on Long Island and later graduated Phi Beta Kappa with a B.A. in English Liternature from New York Univeristy. Justine found her first job in publishing while she was a Freshman. She worked at various publishing houses before becoming a freelance writer. At Little Golden Books, Justine met her future husband, Ron Fontes. They started writing together and have written over 500 children's books. Justine and Ron moved to Maine in 1988.

Ron Fontes was born in Los Angeles. He grew up in Clarksville, Tennessee, where his mother taught him to read at age 4. By 16, Ron had a science fiction comic strip in the local newspaper. He was a theater major at Austin Peay State University, where he costumed and performed in many shows while working at a printing company to pay for school. Ron went on to act in film before becoming an advertising executive, and he then moved to New York City and worked for Whitman Comics and Marvel. Ron is a prolific artist and co-author of over 500 children's books with his wife, Justine.