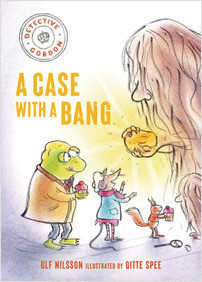 Detective Gordon: A Case with a Bang

From the Series Detective Gordon

Illustrated in full color and packed with character and humor, this is a new whodunnit mystery in the award-winning Detective Gordon series, fun to read alone or aloud.

A Case with a Bang is the final book in the series of funny detective stories for early readers set in a friendly forest in which two determinedly fair police—retired-toad Gordon and the indefatigable mouse Buffy—solve the mystery and stop regularly to eat cake.

Night brings a humming, scraping sound in the woods. Someone has wrecked the badger’s trash can. Later, three large creatures are spotted up on the mountain.

Detective Buffy discovers this seemingly small case really is a dangerous mystery—she comes back from her first investigation flat as a gingerbread, rolled over by something huge and terrifying.

Back at the station, retired Detective Gordon is training a new young police assistant, and the cakes have run out in the forest bakery!

While all the animals cower at the police station, Buffy remembers Gordon’s stories about trolls. Is it possible they do exist? Taking Gordon’s advice about how everyone thinks differently, she finds a way to communicate with the giant creatures—perhaps not so terrifying after all.

The book leaves readers with a memorable Gordon message: Everyone thinks differently, strangers are welcome, cakes for everybody!

This final installment in the award-winning Detective Gordon series is a multi-layered philosophical story about good detective work involving all, kindness to newcomers and doing the right thing.

Winner of multiple awards and accolades, Detective Gordon is a mystery series with depth—perfect for reading alone for emerging readers, wonderful for reading aloud together as a chapter book.

Ulf Nilsson was a celebrated Swedish children’s writer, who wrote more than 100 books for all ages. He is the winner of numerous awards including the August Prize, the Astrid Lindgren Prize and the Swedish Academy’s Children’s Book Prize. His books have been translated into over a dozen languages and made into feature films, opera, radio, plays and other forms – even postage stamps.

Gitte Spee is a renowned artist from the academy of fine art and design in the Netherlands and St Martins School of Art in London. A leading children’s book illustrator, she has also written numerous books, published and translated around the world.

Translated from the Swedish edition by Julia Marshall.

Praise for Detective Gordon: A Case with a Bang
“[J]ust as charming, gentle, wry, and entertaining as the rest of the series and anything that was created by A.A. Milne or Kenneth Grahame.”—Kirkus Reviews

“Full of warm humour and wisdom…with a feather-light touch.”—Best Books of 2015, Horn Book

“…[T]his volume is just as charming, gentle, wry, and entertaining as the rest of the series and anything that was created by A.A. Milne or Kenneth Grahame. Spee’s squiggly colored-pencil drawings again bring everything to life.”—Kirkus Reviews

Ulf Nilsson (1948-2021) was a celebrated Swedish children's author, who wrote more than 100 books for all ages, winning numerous awards and translated into over a dozen languages.

Gitte Spee is a leading children's book illustrator who graduated from the Gerrit Rietveld Academie, a renowned academy of fine art and design in Amsterdam, and St Martins School of Art in London.