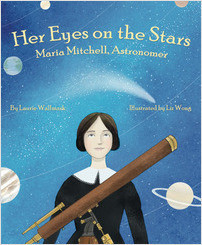 Her Eyes on the Stars

Maria Mitchell’s curiosity about the night sky led her to spend hours studying the stars. She discovered a comet as a young woman, winning an award from the King of Denmark for being the first person to discover a new comet using a telescope.

Now famous as “the lady astronomer,” Maria went on to become a professional astronomer, an unheard of achievement for a woman in the 19th century. She was the first woman to get any kind of government job when she was hired by the United States Navel Observatory. Then as the first woman astronomy professor in the world, Maria used her position at Vassar College to teach young women to set their sights on the sky, training new generations of female astronomers. Her story inspires all of us to reach for the stars.

Laurie Wallmark is the author of several award-winning STEM picture books about women, including Ada Byron Lovelace & the Thinking Machine. She teaches computer science when she's not writing books.

Liz Wong was born in Honolulu, Hawaii, where she spent her early childhood painting and clambering about in mango trees. She is the author-illustrator of several picture books and now lives in Washington state.